A few days ago, Samsung released the official cover for Galaxy Note 3: the S-View Flip Cover and a version that includes a wireless charger. Both cases follow the style of the S-View covers’ series, which includes a window that allows us to read notifications, answer calls, and use some of the features of the smartphone without opening the case, such as the phone camera, or the music player.

The covers for the Galaxy Note 3 also include sleep mode, in which the phone automatically powers down when you close the cover and it powers when opened. 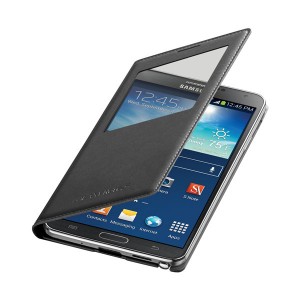 There are many types of pads to choose from, and we must consider some points before rushing to buy one. The key points to check are compatibility (are we going to use the pad for several different devices?), the number of devices that can simultaneously charge, and the operation mode – because the pad can operate plugged or using batteries. We have to think about which mode fits best our needs.

The basic cover is available in a lot of colors and is priced at $59.99 on the Samsung U.S. store. The wireless version, available in white and black, is priced only $10 more, $69.99, but it does not include the charger, which must be purchased separately.