IM applications are growing steadily, gaining users all over the world. There are many different applications that compete to gain a foothold in the market, such as the recent Telegram, which seems to be getting his own niche.

However, three applications occupy the top positions, far from any possible rival. In first position according to the number of users, we have Whatsapp, with 465 million users. WeChat follows with 355 million, and we can find Line at some distance, with 175 million users.

All three applications are free, but if we look at what they won last year, we can met with the surprise that Line won in 2013 505.8 million dollars, while its competitors won 20 million and around 40 million (Whatsapp and WeChat respectively).

Why there is such difference in their gains?

The answer is simple. Line is not just a IM service. It has an extremely powerful iconography around, an extensive collection of paid games and stickers packages, and it has created a whole merchandising around his main characters.

Unlike WeChat, which concentrates the majority of its members in China, Line has 85% of them outside Japan. And although their presence is especially important in countries such as Taiwan, Indonesia and Thailand, Line has also landed in Europe and America.

Spain is one of the countries where the company has been more successful, achieving 16 million registered users. Much of his commercial success lies in the charisma of its characters, and as the tastes of Japan users not always coincide with the preferences of users from other countries, Line has adapted to the local cultures. So in Spain we can find stickers that represent the major soccer players of the moment, while the central character in Brazil also reflects the local tastes. 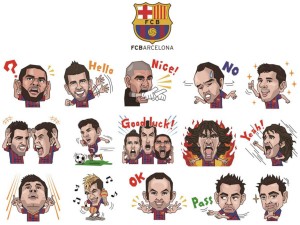 After its successful launch through Central and South America, Line now plans to enter the U.S. market. Aware of the difficulty of entering a country where Whatsapp is well widespread, the Line’s responsible analyzed in detail the next moves before launching into this important market.

Currently Line allows voice calls and video conferencing, besides the typical messages for free, no matter where we are. Is available for iOS and Android mobile devices, and it also has a PC version. 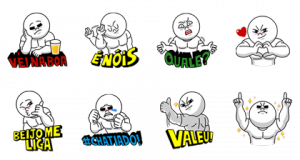 However, its most characteristic feature is precisely the stickers. Line offers a good collection of them for free, but also sells packages for $1. Thanks to its popularity, many users choose to invest this small amount of money to acquire more characters.

Line also includes an aspect of social network where you can create a profile page, Timeline, where only our friends can access. From there, we can share images, messages, follow the publications of our friends and play numerous games, either in single player mode or competing against our friends.