Google Fuchsia has a new design. Will be the successor of Android?

The first time we spoke about Fuchsia was last August, a mysterious new Google operating system on which we never had too many other details. Now a beautiful screenshot of Google Fuchsia gives us a look at what might be the replacement for Android.

Although Android is an open source operating system that can be adapted to virtually any hardware, from smartphones to PCs, from wearable to the IT world, and to cars and TVs, Google is working on a new operating system known at this time just like Google Fuchsia.

We are returning to talk about Google Fuchsia not only to refresh your memory on a possible focal point of the next Google I/O 2017 that will begin on May 17, but also because over the last few hours substantial new features have been discovered regarding the graphical interface of the OS.

The new Google Fuchsia graphic interface is called “Armadillo” and, thanks to the compilation of source code within the Android APK, Ars Technica‘s colleagues managed to pick up some screenshots of the new UI.

What you see on the image is the Google Fuchsia’s homescreen, always organized with tabs and with the profile below. Above the profile image there is a section called “History”, including all apps and tasks that can interact with each other.

The first thing that jumps on the eye is familiarity with Material Design, with different colors for each card and a more flexible multi-window principle than the current one in Android Nougat. In fact, up to 3 applications can be used simultaneously in configuration 33/33/33.

What’s with Kernel Linux and GPL? 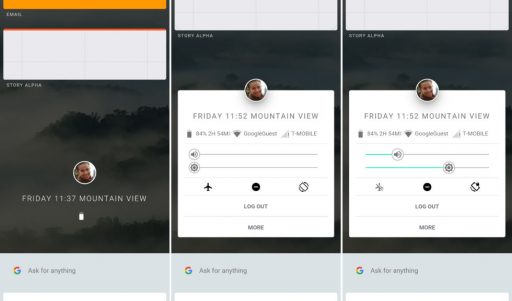 Already last year we knew some details, and there are now further confirmations: Fuchsia will not be based on Kernel Linux and will not take GPL license. It will use a new microcontroller named Magenta, in turn derived from Little Kernel (LK). Let’s start from the license: not adopting that GPL does not mean anything to blow the door to the big margin of freedom that is one of the most important elements on which it supports the success of Android. Fuchsia will adopt a 3-clause BSD license (the original with 4 clauses included the obligation to declare the development by the University of Berkeley, making it in fact an advertisement and at the same time incompatible with GPL, NdR), in addition to the MIT license actually free software) and Apache 2.0. It is easy to guess that there will always be, and in any case, many margins on Fuchsia’s use for third parties, they are just more legal adjustments than anything else for switching to a different kernel.

Why? The purpose is to have more things under control. Think, for example, that Google Pixel still uses the Linux 3.18 kernel of 2014 today, and in a world that runs very fast Google feels the need to wait others’ timings for various updates and adjustments. The interface and applications are written using Google Flutter SDK, a project that actually produces cross-platform code that can be run on Android and iOS. Flutter applications are written in Dart (recognized as standard by the Ecma) whose development is the same to Google. Graphic rendering will be borne by Escher, which can leverage OpenGL or Vulkan APIs.