Aquaris has just announced that this week they will release the Ubuntu version of the Aquaris E4.5.

It is a mid-range terminal, the very same that the company is currently offering running Android. This version, called Ubuntu Edition, has been redesigned to work with the open source operating system Ubuntu.

It will be the first smartphone to hit the market with this OS, and according to their creators, is a fully functional Ubuntu version specially designed for smartphones. It is based on Canonical, and they will be the ones responsible for the software updates.

Looking at the hardware, the Aquaris E4.5 has a 4.5-inch screen with 960 x 540 pixel resolution. It packs a quad-core Mediatek processor running at 1.3 GHz and has 1 GB of RAM and 8 GB of internal storage, expandable via microSD card.

The rear camera has an 8 MP sensor with autofocus and dual flash, while the front one has a 5 MP sensor. It can record videos in Full HD and has high quality BSI sensors. The Aquaris E4.5 includes a 2150 mAh battery and supports Dual SIM.

The device will go go on sale for € 169.9 contract free, and you can buy it from the Aquaris website. That limits the sales to the European market, where the new Aquaris E4.5 Ubuntu Edition will try to get a niche among the fierce competition that exists in the sector.

However, the key point with this smartphone is not the hardware, but the software. It is the first device that hits the market running Ubuntu, so it is not a surprise that it offers significant differences with Android and iOS operating systems, with which we are already very familiar.

The main difference is that Ubuntu is not based on apps, but with what they called Scopes. We can imagine the Scopes as repositories where the information and content are add. From a visual point of view, it appears as a collection of thematic desktops, and we can move between them with a simple swiping gesture. 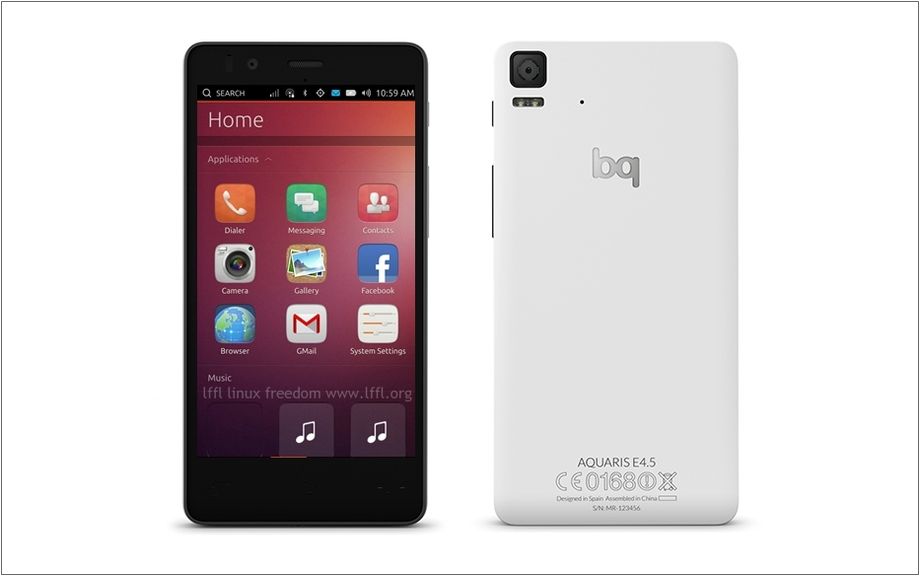 Thus we can find Scopes regarding Music, Pictures, Facebook, news, etc. It’s a completely different way of interacting with the device. The concept is very interesting, but we still need to see the reception by final users.

An obvious problem with a terminal like this, running a different operating system than Android or iOS, is the lack of applications. While Ubuntu already has an app store, there are few titles available yet. We will have to wait for the developers to create all sorts of new apps adapted to the new operating system.

Some features, however, will not be easily solved. There is no support for WhatsApp, and probably will not be any time soon, what forces the user to use another IM services like Telegram, which curiously is factory installed.

The good news for the Ubuntu fans is that the OS comes with root access by default, so you don’t need to do anything to get root permissions.