Xiaomi Mi Mix 2 shown by Gearbest with all the specs

The successor to the first edgeless smartphone is online. The image is probably fake, but the specifications may be accurate. Although, to date, there are still very few information about the successor to Xiaomi Mi Mix (a smartphone that amazed everyone for its design and wide diagonal display), Gearbest, the well-known online store, showed like a lightning strike a whole page dedicated to the next Mi Mix 2.

If you are waiting for the Xiaomi Mi Mix 2 (the successor to the succesful but limited Mi Mix smartphone that gave way to a true trend among manufacturers), maybe the time is coming. About the future smartphone, however, little or nothing is known at the moment, so we are really surprised by the revelation of Gearbest. This online store has uploaded on its website a page dedicated to the future smartphone, complete with image and technical specifications, which reveals details previously unknown.

It should be said immediately that the picture with which the device appears on the site is most likely fake. First of all it is not new but is a render of the many circulated in recent months, made by the Mi Mix fans community to imagine the features of the second edition. Secondly, it is unthinkable, since a front camera is present in the description, which in the image shown would not exist. 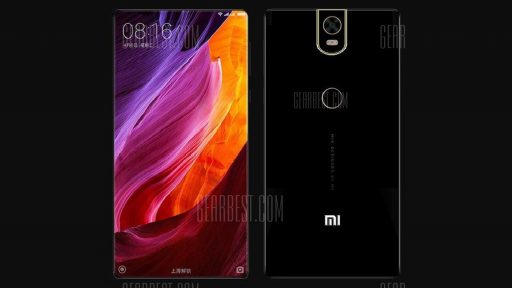 In short, a top of the range smartphone in all respects according to these specs, with AMOLED display, 8 GB of RAM and storage space for thousand of pics, music and movies. If we add to this datasheet the unique design that should have been entrusted to Philippe Starck again to ensure a natural evolution of the first model and the AMOLED screen that should be curved on Xiaomi Mi Mix 2, the new smartphone could represent truly one of the best Chinese devices of all times.