The technology does not stop, and consequently the Social Network is stepping in. And after the last and vivid changes introduced by Facebook, the team led by Zuckerberg accelerates to fine-tune the new performance of WhatsApp.

In this regard, the developers of the world’s most famous messenger application are running to finish the expected release of the new version. Obviously, compatible with the two most popular mobile operating systems: Android and iOS.

Important news, then. From the brand new interface, which features a complete restyling. From shapes, icons, menus and colors, to the most striking features of the entire platform, where radical and incredible changes are anticipated.

Once you get used to the new interface you will discover all the news that the app has reserved for us. The first two deals with message retrieval and the ability to highlight up to three different chats.

With the first feature, and for a complete deletion of a message, just select one not displayed by our contact and move it to the usual trash bin.

To highlight selected chats instead, the method will be easy, just press on the desired chat, wait for the menu to open and select a particular icon that looks like a drawing pin. 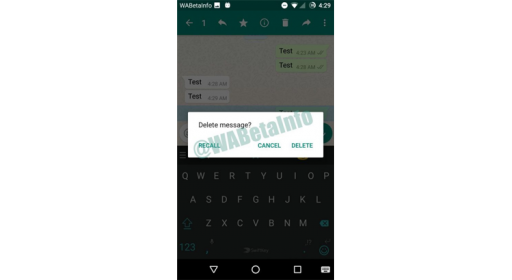 Because it’s not over, engineers and computer technical experts are also improving the locator or live position feature. The newcomer, though not entirely clear as it will be, will allow the new feature not only to locate a particular contact on the map, but also to track all their movements live. Privacy permissions? We have no idea. In addition, for both operating systems, warnings will be introduced and will indicate both the current status of the battery and the possible change of telephone number of one of the contacts.

Finally, WhatsApp will have a completely new GIF/video editor and capable of converting any movie into a GIF. The new feature will feature some features similar to the current version, but the process speed will be improved. As they say, curiosity does not age. In fact, for all enthusiasts, the WhatsApp Beta installation could not be missed to enjoy exclusive preview of all the impressive innovations made to the future version.