Traffic Racer, the most popular cars’ game on the Play Store


Traffic Racer, the most popular cars’ game on the Play Store

Traffic Racer has currently risen to the top positions in the charts of most downloaded games. It was launched in November for Android devices, although it had been available for more than a year for iOS users. Within the weeks it has been on the Play Store, it has been raising positions until now, where it have reached 10 million downloads in one month.

The game offers a good balance between good and accurate 3D graphics and simple controls. The obejctive of Traffic Racer is run as fast and far as possible. There are four modes of play, always in 4-lane roads. In the first mode there is only one direction of circulation, while in the second one there are two lanes for each direction. The third mode, Time Trial is a trial in which we have 100 seconds to go as far as we can. Finally, in Free Trial mode we can run freely as long as we want.

Traffic Racer features four difficulty levels, determined by the 4 circuits available. In the simplest scenarios we have the suburb of a large city and a road crossing a desert. Increasing a little the difficulty, we have a circuit in an urban environment at night, with low visibility. And the hardest level is located on a snowy road with slippery ground. The first two circuits are available from the beginning, while the other two have to be unlocked. 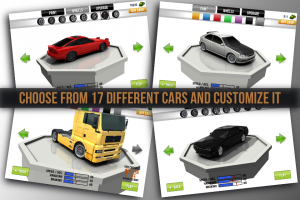 At the end of each race and win points and cash based on the overtaken cars, the distance traveled over 100 km/h or for the seconds that we have circulated in the opposite direction. With this cash, we can invest in change or improve the car we have. We can purchase spare parts for our car (tires, paint, acceleration capacity, maneuverability and braking), in addition to choose between different vehicle models, from buses and trucks to supercars.

You can download the game for free on Play Store or for $0.99 on iTunes.