Sony Concept for Android for the Xperia X ends in May

In 2015, Sony created a special program for the alpha tests of the various firmwares for the Xperia smartphones. This program was called Concept for Android and until now was available only for the Sony Xperia X, but soon everything will change: Sony developers have announced that the current program will end in May and then will launch another dedicated to the Sony Xperia XZ Premium.

The news has been given directly in the official forum of the Sony inTouch community, where the owners of a Xperia X are invited back to the official firmware of the device, since no new updates of Concept will be published for this device, removing also those that contain the monthly security patches that will be sent again, according to the official publication. Remember that the purpose of Sony here is provide users with a personalized version of Android, being that also part of Sony devices as differentiator between competitors

However, the Japanese manufacturer has emphasized that the Xperia X InTouch forum community will remain active, anticipating that the next smartphone that will participate in the Concept for Android project will be the Xperia XZ Premium. Although at the moment there are no dates for this apparition, since the device has not yet reached the market. We’ll have to wait for new communications to find out more.

Concept for Android will have fewer members in the future 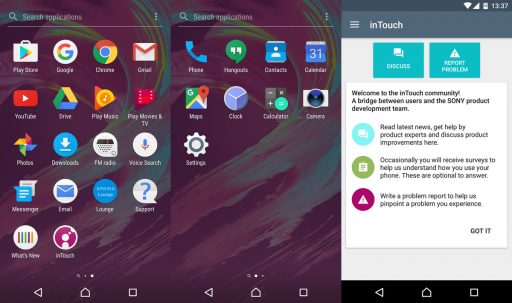 If we make something clear of all this, on the other hand, given the specifications and exclusive availability of the Sony Xperia XZ Premium (the most powerful smartphone of the Japanese giant and at the same time the most expensive), it is feasible to think that the number of members will be very limited.

Current program contributors will be notified when the support ends. Anyway, we look forward to more information on this new Concept for Android and how it will work for those are enrolled in the current version. Let’s not forget that Sony’s real goal is virtual reality, so the Japanese company will now focus primarily on the features that a more powerful smartphone can afford.