Solu – a PC that fits in your pocket

One of the most repeated descriptions on smartphones is that they are pocket computers, and not without reason, but a Finnish start-up wants to take it further and shows us a device that fits in your pocket but can become literally a PC by simply connecting to a monitor, turning your screen into a trackpad.

A portable device that when connected to a screen becomes a computer is something attractive, but Solu also wants to change other items. For starters this is a device that runs on the cloud, with all your content stored externally, so that if you lose your Solu not lose what you have in it, and yet its creators say it is also functional when you have no connection.

Another factor to consider the propose not only paying for the applications, but a flat fee per month to access to storage and programs that you need, something like a kind of Spotify. The idea is that the monthly rate will fall about €20, but if you have enough demand could include different plans. In terms of features, we find a screen with a resolution of 1440 x 1440 (450 ppi), support for 4K monitors, NVIDIA 4-Plus-1 processor quad-core, ARM Cortex-A15 at 2.3 GHz, NVIDIA Kepler GPU, 4 GB of RAM LPDDR3, storage capacity of 32 GB, dual-band connectivity 2 × 2 MIMO WiFi (802.11 a/b/g/n), Bluetooth 4.0, USB Type C, 1200 mAh battery, dimensions of 102 x 102 x 13 mm and SoluOS. 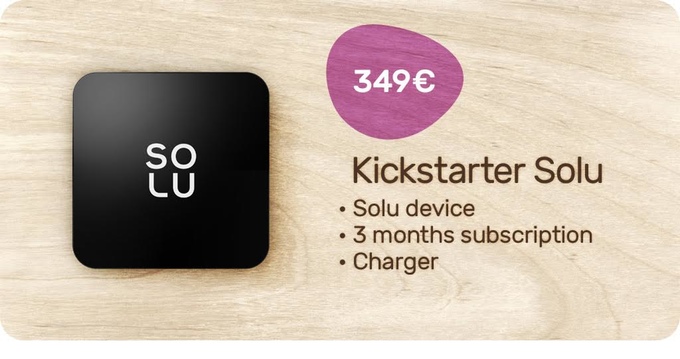 Furthermore, although Solu applications have been developed with HTML5 also supports Android applications, although they have not yet defined the way in which these may be installed. Solu put special emphasis on the ability to share content as well as collaborative work.

Solu – a PC that fits in your pocket