A couple of days ago, Google launched a new project that might take some time to fully work. This consists on the fabrication of a smart contact lens with a very specific function: monitoring glucose levels.

This is great news for people with diabetes, because these lenses eliminate the need to draw blood several times a day to check sugar levels. The lens incorporates a tiny sensor and an antenna capable of sending the data obtained at a reading rate of one second. They also carry a small LED which can be activated in case the sugar levels detected were higher than a certain value. The device is wrapped between two layers of soft contact lens material.

The detection is possible by the changes of the tear’s composition as a function of blood’s sugar level. For now, Google has announced that they are working on this idea, and already have several prototypes. However, they are still talking to the FDA (the U.S. Food and Drug Administration, USA), which should regulate their use and ensure that it doesn’t involve any risk to the eye. They also are looking for collaboration with many experts in the field of medicine and in the subsequent development of the necessary applications. 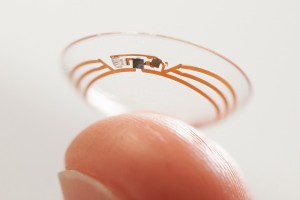 It is too early for this device to see the light, but Google has confirmed that they have already conducted several clinical studies to refine the prototype. If the project finally reaches the market, it will benefit many people, especially because at the rate the disease is spreading, it will affect one in 10 people worldwide by 2035, according to a report from the International Diabetes Federation (IDF).

With this little device, the quality of life of many people will improve substantially. You will find all the details in the Google’s announcement.