The Galaxy Note 4 has an amazing 5.7-inch screen. It is a Super AMOLED with Quad HD resolution (2560×1440 pixels). The company says it is able to provide high-contrast images from all angles, while maintaining a very fast response time.

It’s powered by a quad-core processor running at 2.7 GHz or by an 1.9 GHz eight-core one (two quad-core, one at 1.9 GHz and the other at 1.3 GHz), depending on the country and the carrier offering the device. It has 3 GB of RAM and comes with 32 MB of internal memory, expandable via microSD card.

It includes two cameras, a rear 16MP one equipped with Smart Optical Image Stabilizer (which counter-balances camera shake when taking a picture and adjusts the exposure according to the ambient light) and a 3.7MP front one with f1.9 aperture, which allows you to shoot at an angle of up to 120 degrees. 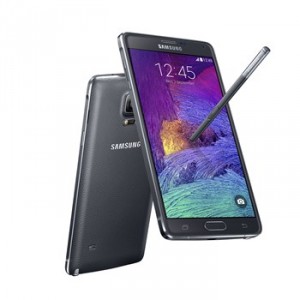 The Galaxy Note Edge is a very similar device than the Note 4, with which it shares most specs, but it has a unique feature. The Note Edge has a curved screen which extends along one side of the device and acts as a secondary display. Through this screen, you can receive notifications, alerts and even access some applications without opening the cover.

The main screen has the same resolution as the Note 4 and a size of 5.6 inches. In addition to the main screen, now we have the curve extension offering other 160 extra pixels. All other specifications are identical to the Galaxy Note 4 and both come with Android 4.4. 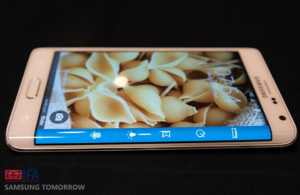 Both devices include the characteristic S Pen, which has also received a number of enhancements that enhance its performance. Along with better control and more writing options for the apps, it has been upgraded to simplify and improve the interaction with the S Pen, so it is easier and more practical to use than the previous version.

The two devices also feature a fast charge mode, which charges the battery (3220mAh in the case of 3200 mAh Note 4 and Note on the Edge) in record time.