Samsung has filed a revolutionary patent: it would allow to run simultaneously on the same smartphone two different operating systems. The magic word on which to pay our attention is the adverb “simultaneously”.

Once again, we talk about Samsung for the attempt to develop devices able to fulfill simultaneously the execution of two different operating systems. In this case, the South Korean company has filed a patent application for a device that is able to simultaneously mount Android and Windows Phone, in a device that could (at least in part) remind the ATIV Q.

It is not rare to see, especially in Asia, smartphones with installed versions of Windows and Android running in dual boot, but unlike the latter devices, the new Samsung smartphone should not allow users to select which operating system to load during booting, but rather, it should com to guarantee the execution of both OS, dividing the screen in two different parts, dedicating each of the two to an operating system, with the possibility of exploiting the two environments running simultaneously. 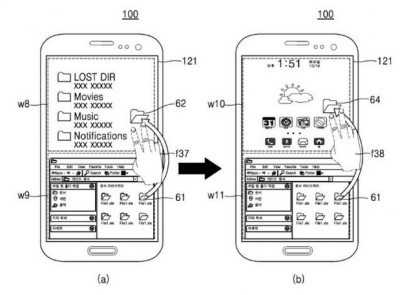 The patent -whose application for deposit in South Korea was made by Samsung during the month of May last year- has just been announced in the past few days: hence it is not possible to state with certainty that the company from Seoul has carried out this project, as indeed, it may be premature to consider the abandonment of the project by the same Samsung.

Instead, it is reasonable to believe that this type of device, because of the specific software characteristics and needs in terms of hardware, it can be intended -if somehow it is released- to enterprise customers. In the patent, in fact, it emerges as the smartphone should enable the control of the processor core, or again, to set the RAM usage by the OS and other similar customizations.