This year seems to be the year of the quantifier bracelets. All major manufacturers have launched a model, and some not so well known companies have also targeted the wearable technology. Razer is one of these companies. Until now, it was known for launching the Edge tablet and Blade gaming laptop, and now it has decided to make the jump to the wearable technology.

The Nazer Nabu has an original design with two screens, a small 32×32 pixel OLED display and a larger 128×32 pixel OLED one. The motive behind the double screen is privacy. The smaller one is located in the outer part of the wrist, on the most visible area, and it displays the notifications that we have configured on our smartphone. The second screen, much larger, is located on the underside of the arm, and it shows more detailed information about the person who is calling, or the received messages. Thus, the personal information is not the view of everyone, and we have a certain degree of privacy on the details of notifications and incoming calls. 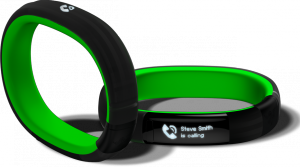 This smart band also includes altimeter and a cylindrical vibration motor, which allows using the band to monitor our physical activity, such as counting steps, display the calories burned, etc. The results can be seen in the form of graphs and statistics on the mobile phone app where it is installed. Razer also makes available its specific SDK to developers, to create new applications and functionalities for the Razer Nabu. For developers, the bracelet is available for just $50. 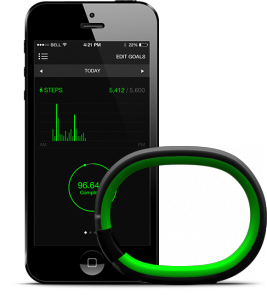 However, the most unique and original feature of this band is the way we can interact with other users. It allows us to use gestures to perform actions, such as sharing information when shaking hands with someone. Nazer intends to use everyday gestures to reflect our social relationships, facilitating the process of share information between nearby devices. It will also include the possibility to play augmented reality games, turning the world into the perfect setting for our missions.

The bracelet is compatible with iOS and Android devices with the Nabu Utitlity app, which can be download for free from the App Store and Google Play respectively. It has a lithium battery recharged via USB, and we can put up with a moderate use for 7 days. The band is resistant to drops and splashes and can work in a temperature range between -20°C and 45°C.

It goes on sale later this month or in early June, after being delayed slightly to ensure it is 100 % hypoallergenic. The delay is due to problems that the Force bracelet Fitbit had, when in mid-February it had to be withdrawn from the market after the problems of irritation and rashes on the skin that many users had experienced. Once they are sure that there is no problem with this band, the company offers it in various colors and with two sizes to choose from. Razer has announced that the price will be set under $100.