Quip is available for Android


Quip is available for Android

Quip, the word processing app created by Bret Taylor (former Facebook CTO and FriendFeed co-founder) and Kevin Gibbs (father of Google Apps Engine) is now available for Andoid users. Since its first appearance on July for iOS and the Web, it has seen hundreds of thousands of documents created, and millions of messages generated.

This app is a modern word processor that let users create documents on any compatible device, phones, tablets and desktop. It can be used to share lists, messages or documents, which are combined into a single chat-like thread. Quip also enables users to import files from Microsoft Word, Dropbox, Evernote, and Google Drive.

When you install the app, it detects what device you are using and automatically adapts to its size. It can fit properly in any device and it’s designated to natively support large screen sizes like the Nexus 7 and Nexus 10. Quip offers an expanded view of your Desktop and Inbox when using these large screens. The app also works well with virtual keyboards like the Swiftkey and Swype. This Android version also includes automatic Google account integration and Stacked Notifications. 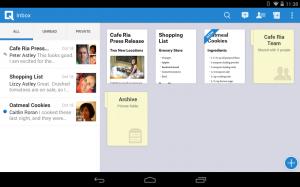 According to Gibbs, Quip’s head of engineering:

“Our goal is to bring next-generation word processing to as many people as possible, as fast as possible, wherever they are. As tablets and phones overtake PCs, the reality is that most people in the future will access the Internet for the first time through a mobile, touch-screen device without ever touching a PC. By setting our sights on this, we aim to do for the era of smartphones and tablets what Microsoft Office did for the era of PCs — we want Quip to be the essential productivity suite for the mobile era.”

You can download the app free from the Play Store. It runs of Android 4.0 and above.