Panasonic’s 20 inch 4k tablet will be available in the US next January. We saw it for the first time in January 2013 at CES and it will be finally on sale for $5.999. The company announced two models for Europe but only one for US – the higher end UT-MB5. Below are the characteristics of this impressive device. 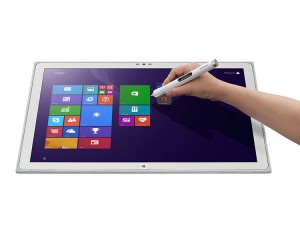 Below, you can find a demo video:

Panasonic Toughpad™ 4K Tablet has also an unprecedented level of precision. You can also acquire the optical natural hand writing pen, which offers you 2048 levels of pressure with sensitivity and accuracy to the pixel level. This is possible thanks to the Anoto technology, which unique dot pattern is ideal for digital writing on tablets and screens. Its technique lets artists draw on Panasonic’s 4K tablet with higher accuracy and fewer worries about the touch surface’s size or composition. This feature turns the device into something incredibly useful for marketing professionals, photographers, architects, and other such business users.