Nexus 5 could be more expensive than expected.


Disappointment for those who have heard the rumour: the Nexus 5 could be more expensive than expected.

Do not stop the rumors about the Nexus 5, daily in the foreground of all the technology forum, specially for debates about the price, considerably lower than an iPhone 5s.

After the publication of some photos, the novelty now, might concern the conditions of sale. The price could in fact be higher than expected, apparently due to the Google intention to produce a new version of the Nexus 4 that supports LTE networks and providing internal memories 16 and 32 GB, withdrawing the current with 8 GB.

It had already talked about Nexus 4, 2013, but it was not intended to be marketed simultaneously with Nexus 5.Both from the hardware and aesthetic point of view will not change anything, even the price should remain the same. In a nutshell, the only change on the Nexus 4 will be relative to the support of the LTE network. There is nothing official yet but persistent rumors indicate the following values: 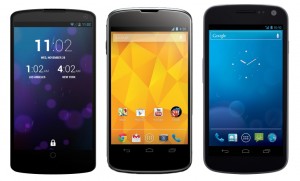 If the values were these, we could imagine the reaction of those who have already relied with the prices that had emerged earlier, both for the Nexus 4, (whose prices seem excessive) and the Nexus 5, which according to all was an opportunity not to be missed.

Rumors discordant and probably exaggerated, but that might hide some truth if Google decides to launch an all new model of the Nexus 4, which many have enjoyed. A strategy that presently even the Apple is taking and that could create a greater alternative for users.