Netflix will no longer be downloadable on Android devices with root

Netflix has just released the major update 5.0 for its mobile app. In addition to adding the already-anticipated HDR-Dolby Vision standard to the LG G6 only, the update makes software non-compatible with all Android devices with root permissions.

Several US users reported on Reddit and other related sites a problem downloading the official Netflix app from the Google Play Store. Specifically, the reported issue concerns users who have rooted/unlocked devices. The Netflix app no ​​longer appears as a search result within the Play Store and, in other ways, the page dedicated to the app is shown as incompatible with the device, although it is actually installed and working.

For this reason, Netflix has decided to officially respond to the innumerable questions raised by its world-wide customers who have rooted devices or unlocked the bootloader and since yesterday could no longer download the Netflix app on the Play Store. Netflix then confirmed the end of support for devices that do not fully meet Google’s security requirements. Here is the complete release:

“With our latest 5.0 release, we now fully rely on the Widevine DRM provided by Google; therefore, many devices that are not Google-certified or have been altered will no longer work with our latest app and those users will no longer see the Netflix app in the Play Store.”

This was not a mistake or a temporary problem, but a Netflix position. Currently the app is still working properly on rooted devices, those who want to keep upgrading their app will have to do so via alternative (and yet fully legal) channels like APKMirror. We will see if the compatibility of the app will cease in the future or the current compromise will continue. 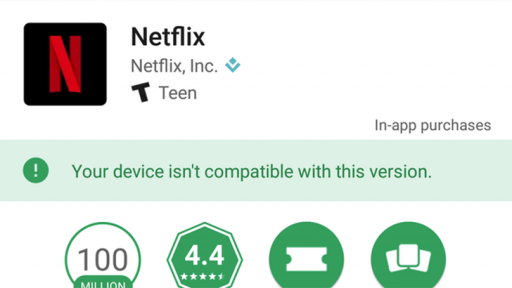 Netflix is not the first service that has blocked the way for the most vulnerable users, following other giants such as Pokémon GO and Snapchat. In these two cases, however, the choice followed the need to prevent cheating in the game (in the first case) and saving images irregularly (in the second). For Netflix, the decision might be linked to the ability to save and view offline content.

What happens to smartphones and tablets that have the app already installed, so? Absolutely nothing for the moment. As reported by many users with rooted phones, the software runs smoothly without any restriction or problem. Nothing prevents Netflix or Google from completely removing support unlocked devices in the near future, but for now, there are no particular problems with the normal use of the app already installed.