Motorola has announced today the Moto G, a slightly lower versions of the Moto X. It’s a cheap wide-ranging model that will be sold on Motorola’s online store directly to customers without a contract. The most remarkable factor in Moto G is the price: $179 for the 8 GB model and $199 for the 16 GB model. The company says that Moto G is a device for price-conscious consumers who don’t want to pay $600 or more for high-end smartphones.

Moto G comes with 50 GB extra of free Google Drive storage for two years. It has also a removable rear panel interchangeable for a plastic panel available in different c olors. Below, you can find Motorola’s first Moto G commercial.

It has no competitors in the mid-range device, as any other smartphone with these specifications needs a contract to be sold for a similar price. Moto G is launched today in parts of Europe and Brazil, and will be available in the rest of Europe, Canada, Latin America, and some parts of Asia in the next few weeks. The US version is programmed to be launched in January, and no news about the contact price has been provided so far. 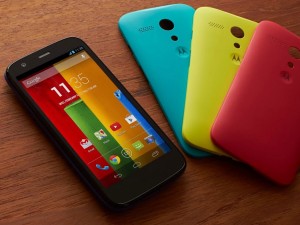