Since the birth of Android, the OS has followed a precise pattern for naming the various versions. After Android L arrived Android M, then Android N. Following this special code, it is likely that in the future the next version of Android will be called O. And that’s what the new Moto G4 Plus (and Moto G4) says.

But we do not know whether Google actually decides to continue with this path or not. Maybe the company could decide to eliminate one letter and go to Roman numerals, who knows, but the fact is that Motorola is actually quite certain about Google decision with regard to Android O. In fact, Motorola, to promote its new Moto G4, reported in a teaser that the device will be released with Android M, but will be updated to Android N and then to Android O.

Whereas Google has yet to announce what will be the name of Android N (Nutella seems to be the favorite), there will be much talk of later, indeed this is the first time we hear of it. From a marketing standpoint it is surely a winning strategy if we consider that an update was announced for an operating system that actually does not exist. 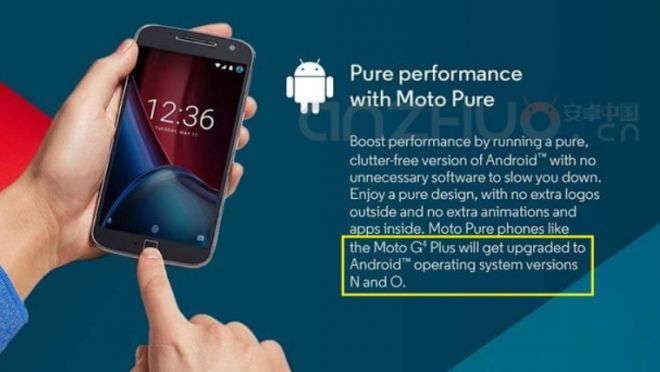 So It does not seem an error or a wrong letter in the title. Lenovo is already putting an eye on the future with Android O for the new Moto G4 Plus. The image you see here above confirmed as the Motorola philosophy also has been kept under Lenovo and thanks to a virtually stock UI and a newer hardware, the next distribution upgrades will be guaranteed.

Not only to Android N, but also to the next system release, which, theoretically, should debut in September 2017, and is guaranteed as a possible upgrade. Android O (Oreo for many) has not yet been probably even thought by Google but every year the major Android release allows you to do many forecasts and in a way fairly certain.