Android 6.0 Marshmallow managed to overcome the barrier of 10% (10.1% to be exact) posting a 2.6% increase compared to the share recorded at the beginning of May. The figure is positive, even if you can certainly speak of a growth overwhelming pace, or a percentage able to contain the phenomenon of fragmentation which remains a constant of the ecosystem of the Mountain View company.

The increase of the installed base of Android Marshmallow devices is in good determined by new devices that bring a pre-installed version of the OS. If you look, in fact, the overall percentage held by Lollipop (Android 5.0 + Android 5.1) it can be noted that the change from the previous update is minimal: 35.4% in June, 35.6% in May. This means that the growth of Android Marshmallow was determined only in part by the updating of smartphones based on the previous version of Lollipop. 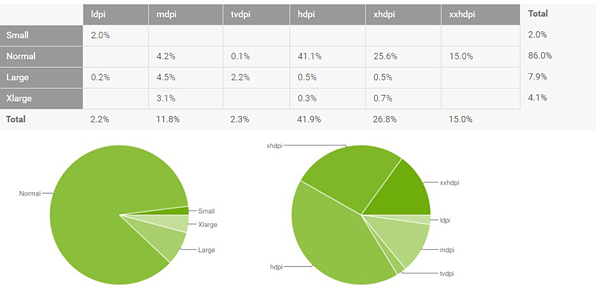 Lollipop continues to present itself as the most widespread version of Android operating system, keeping more than one third of the installed base. Nearby is Android 4.4 KitKat with 31.6% share, a figure slightly lower than that recorded at the beginning of May: 32.5%. Drops below 20% the share attributable to the overall installed base of JellyBean devices, is formed then by all devices with Android 4.1.x, 4.2.x and 4.3, representing, at the time, 18.9% of Android device (20.1% in the update provided in early May).

The older Android devices based on JellyBean are then used less and replaced by newer smartphones, although it is still a significant presence of such devices in Google statistics, especially if you compare the figures with that of Android Marshmallow. This version of the OS was introduced in the fall of 2015, but, as mentioned, only in the month that has just begun has managed to exceed the 10% limit. There is no mention of Android N, the latest version of the operating system that is currently under development with a onset date set for the autumn.