Huawei seems to confirm compatibility with Android Wear and iOS

The Huawei Watch is bookable on Amazon. So far so good, but if we look at the description of the watch we find the following sentence: “Compatible with most devices with an iOS 8.2 or Android 4.3 or later operating system.” And the sentence is still there. Is it a mistake or an advance announcement?

Although there may be a list with errors (it can happens in the best families), it is not unreasonable to think that Android Wear is preparing to reach the iPhone. The operating system for wearables of Google just updated to version 1.3 and has included a couple of major improvements such as interactive areas. Besides its ecosystem of smartwatches it is in full swing, with the second version of Moto 360 in this way and Huawei Watch as an example of traditional design with leading specifications.

So it is a good time to open the platform to Apple users too. And why would they want (iPhone users) to have Android Wear instead of an Apple Watch? First for the price: there are more affordable options. And secondly because the clocks are, after all, fashion. The user experience depends on their own preferences. 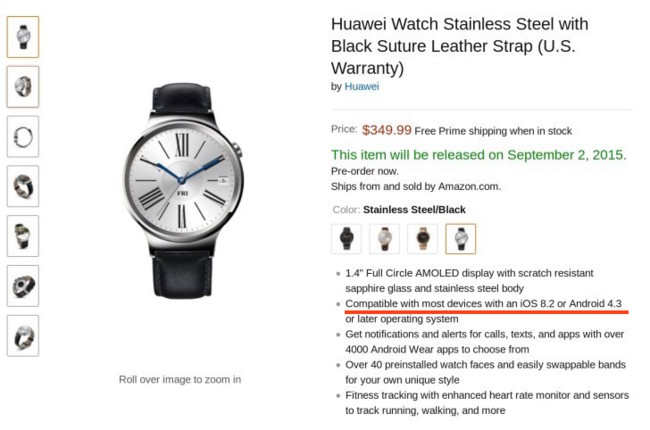 Rumors pointed to Google would announce this support during his conference Google I/O, but finally it did not happen and the waters subsided. But now return the rumor, and it is strong because it comes from one of the most interesting and attractive smartwatches this year, Huawei Watch, and in a serious online store.

The reality is that many users of iOS hope that this support is officially announced, mainly because of the possibility of having more options, more designs at a lower price than Apple Watch, which will certainly take off platform and many Google users would acquire iPhone Watch with Android Wear.

Huawei seems to confirm compatibility with Android Wear and iOS