The social network created by Google in 2011 and with over 540 million users today announces a redesign and restructuring both its website and in its application. Although Google+ is possibly one of the bigger errors of Google that still stands today, Google+ continues as one of the best social networks for communities and groups. This features makes the difference with other social networks, focused more on the relationship between friends and society.

Perhaps this is the reason why Google+ had not success with young people. Anyway, if you have Google account you have created a default profile on Google+, at least to Save the Date. Google itself today has posted an entry on its official blog that tells why this new design and what’s new. As told in its blog, Google+ designers have been inspired by a part to the comments and suggestions received in their mailbox, and moreover, by comments from people active in their social network which they have visited in their own homes, and they have been invited to test this new interface.

To begin Google+ has created a new feature called “Google+ Collections” where you can share and enjoy entries organized by topics such as “Music” or “NBA”, whatever. On the other hand, they have “moved” other functions reported as “non-essential” by users, for example, elements of “Google+ Photos” have moved to the new application for Google Photos. Thus, Google+ restructuring being more simple and organized. But undoubtedly the biggest news is that you can now use Google “itself” without having to create you a profile on the social network. This way, to create a new Google account you are not obliged to create a new profile. But if you do, there will be no synchronization problem. The same applies to YouTube. From now you can create a unique YouTube account and you are not forced to “linking” to your Google Account and therefore to Google+. 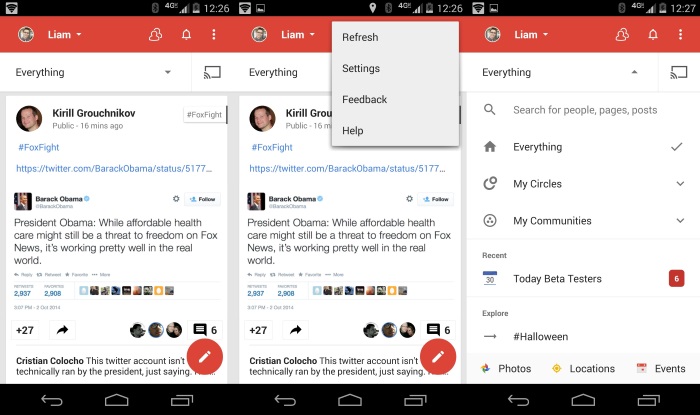 Now your Google account will not be searched nor your account can’t be followed and no longer be an entry in its social network. In the design section, the big G says that Google+ has focused on the collections and communities. Communities so far has been the feature that most attracts different users. In this respect the social network organizes and coordinates as any “groups” of people, that would be equivalent to groups or Facebook pages, for example.

Google gets this good organization bringing together groups of people with similar interests to discuss or debate about these. They are also used by companies or developers to create a “community” of people interested, it contributes, uses or supports the product of the company. In conclusion, Google started on the wrong foot forcing their users to create a profile, but has proven to be good in some ways and is capable of improving them, listening to their users to a certain extent, and thus attempting to pull before the social network.