Atomic Fusion: Particle Collider is an arcade game that brings you into the world of quantum physics from the hand of a small hydrogen atom. The goal is to accumulate energy to reach a fusion stage with your atom and evolve to a new one.

The energy is obtained by absorbing waves of light that will increase or decrease the amount of energy, in function of the color of your atom. Waves can be either blue or orange, corresponding to matter or antimatter, and depending of their relative colours, they can accumulate energy o destroy each other. 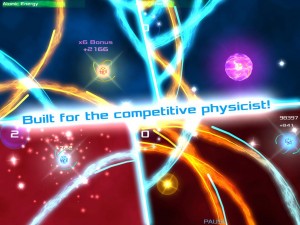 Dragging the atom to the wave energy, you will absorb it, while if we send an atom of matter into a wave of antimatter, both will be destroyed and the energy lost. The game ends when you lose all the energy.

The controls are simple and adaptable for left and right handed people. Dragging across the screen you can move the atom, while clicking on it changes the color. We also find electrons, which we can accumulate in a counter. When it reaches a certain level, they can be absorbed and become part of the internal energy of our atom. 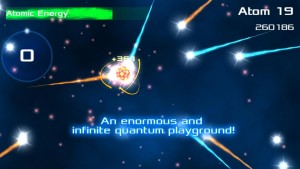 Once we reach the necessary energy level, the atom will reach fusion and we will discover a new element, following all the way through the periodic table to reach the undiscovered elements, which we will be able to name.

The difficulty of the game increases as you advance to more complex elements, because the energy waves are random patterns, so the difficulty is higher and there isn’t any identical try.

Atomic Fusion: Particle Collider has a free initial part that lets us discover the first atoms and from there on, it requires a single payment of $1.99 to unlock the whole game. It is available for iOS and Android in the App Store and the Google Play respectively.