Hexamob 09/9/2013
Initially, smartphones were introduced completely in our life and for many people they have become an essential. Then, the tablets arrived, a kind of devices that many did not think the possibility that in a short time would replace PCs, laptops or other computing devices we had at home. Now, it seems that is the turn of smart watches. Nobody knows for sure whether they will be accepted by most users, but what is certain is that the manufacturers are working very seriously on them. Proof of this is that manufacturers like Sony, Samsung, LG,… and companies like Apple, Microsoft and Google will have one or more smart watches to synchronize with their smartphones using them as accessories or to replace them totally.

There are two types of smart watches: those who work as a complement of your smartphone or tablet and those who work standalone like any other smartphone. We are going to talk about some of the most important.

According to Samsung , the perfect complement to the Galaxy smartphones and tablets. Samsung Galaxy Gear is the new smartwatch presented last week at the IFA 2013 in Berlin. This smart watch does not work standalone, independent of our Android device as there is no SIM card. It’s an accesorie capable of interacting with your smartphone or tablet so you can receive notifications or access information of your smartphone or tablet without having to take them with you. Connected via a Bluetooth connection with another Galaxy device, you can make hands-free calls , add entries to the calendar, composing messages, etc … 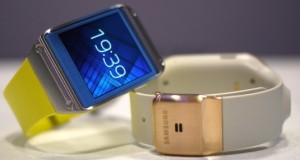 Keep in mind that Samsung is a very important company in the technology sector and the fact of presenting a smart watch ensures that many Android applications will be adapted to this screen format. In fact , applications like Evernote, Line, or ChatON have already been adapted to this new format of device. In order to know the full specifications of the Galaxy Gear please see the following table: 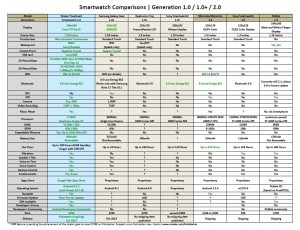 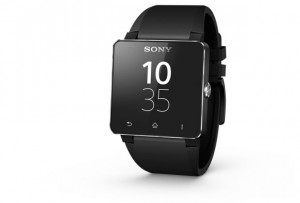 Pebble is a smart watch that has emerged from a project presented at Kickstarter, the famous website dedicated to crowfunding . This smart watch is something different from the Galaxy Gear or Sony Smartwatch 2. Its technical characteristics are very different from the rest of smartwatch in the market and its major strengths are its simplicity, its e-ink screen and the compatibility with Android devices and iPhone . This last, is the most important feature -multi platform- because it has been a product for which many users have backed on Kickstarter . However, the technical features have made ​​it a little poor for users who expect power and features in a device of this type. 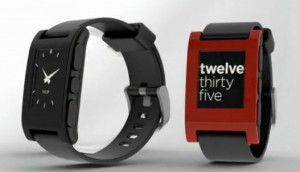 This smart watch is, in my opinion, the best product that anyone can buy to use like a Smart Watch and I will explain my reasons. Omate TrueSmart is a smart watch that works standalone, independently from your smartphone or tablet and you can insert a microSIM . It builts Dual Core ARM Cortex A7 1.3Ghz and it works over 2G and 3G WCDMA networks . Its specifications are similar to those of many Android smartphones that are on the market and they make this device a small screen smartphone that you can easily carry even when you’re swimming, beacuase it’s waterproof according to IP67 + spec. You can discuss any technical specifications in the table above. Omate TrueSmart has emerged from a project started in Kickstarter that is being highly backed by many users who have made so many donations to this project and actually it has exceeded 500% of the money needed to be done. In October 2013 it will begin shipping the first units and also is preparing a large community of developers who will have the needed tools to develop Android apps optimized for this type of device. Thinking about all smart watches submitted, I think this may be the most useful to users because you can use it like an accesorie of your Android or like a standalone device. In addition, its technical specifications are very good and the support seems to be very important. The best: the price. For less than $200 you can get one of the Omate TrueSmart . Awesome! You can compare specifications with other smart watches in the table above. 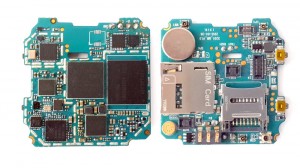 There are more smart watches to comment but basically these are the most important. The most important is to know what users think about all these devices. Finally , they are the ones who have the last word.