Choose Your Own Adventure: Sorcery!


Choose Your Own Adventure: Sorcery!

Sorcery! is a blend of Choose Your Own Adventure style book and a RPG game. We will advance through the story with the appearance of a figurine that represents our character, and the plot unfolds in text format.

This game is an adaptation of the first book of the Fighting Fantasy series, written by Steve Jackson, and the mobile version has the participation of illustrators like John Blanche (original illustrations), Sharam Eddie (DC Comics) and Mike Schley (interactive map, Wizards of the Coast).

Sorcery! uses inklewriter technology to tell the history, which is being defined in real time as we continually choose between different options . Thus, the game is being developed based on our choices, and each game is different from the previous one. 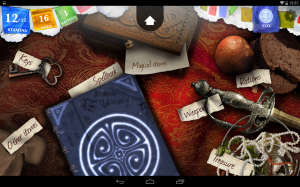 In this story we must recover the stolen crown of the goblins. It also includes turn-based fighting scenes, where we can choose the power of the attack; although the recovery time will be conditioned by the strength we have chosen. So we must keep a minimum strategy to maximize our energy.

We move along a fairly large map, choosing paths according to the options that we find. In addition, we also have a book of spells that allow us to avoid some fights and discover information.

The only “problem” is available only in English, so if you do not know the language, you can forget about trying to play it. Sorcery! is available for iOS and Android for $4.99.

The complete series consists of four games, which will gradually reach the market. Currently, the second one is available for iOS, and it is scheduled to arrive soon at the Google Play. You can download the second part, “Khare: Cityport of Traps” from the App Store for $4.99.