We presented the Blackphone a few weeks ago, the smartphone that put safety above everything else. It is developed by Silent Circle, mobile encryption experts, and Geeksphone, which recently launched the first smartphone with dual operating system (Android and Firefox). The blackphone works with its own version of Android known as PrivatOS, which encrypts data voice, image and video.

The Blackphone has a 4.7-inch IPS HD screen, a 2 GHz quad-core processor, 2 GB of RAM and 18 GB of internal memory. It has a 8 MP rear camera and a front 1.3 MP one. The device comes with Wi-Fi connectivity, GPS, Bluetooth 4.0 and LTE.

Last February 24 was officially launched at the Mobile World Congress and we can pre-order it for $629. For this price, we get a free phone plus a number of security applications preinstalled with two years of subscription. 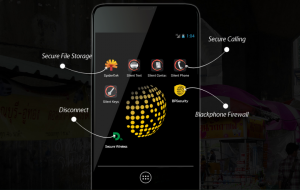 These applications, along with PrivatOS operating system, are responsible for giving the user control over all issues regarding security and privacy. Silent Circle applications include Silent Phone, Silent Text and Silent Contacts, and it also offers anonymous browsing, anonymous search, VPN Disconnect and 5GB of encrypted storage with SpiderOak.

To avoid this potential problem, Silent Circle gives three free subscriptions with each Blackphone, so we can invite three friends or family members to an annual Silent Circle’s account.

You can find more information at Blackphone.