BBM for Android and iPhone


BBM for Android and iPhone.


It’s a reality! BBM is finally available for Android and iPhone users. After the great success of BBM on Android users, the developers are implementing a line-up system to ensure a smooth roll out.

Once you have downloaded BBM (you can do it from BBM site), you can install it and introduce your email to hold your spot in line. You will receive an email from the staff when you reach the front of the line and then you can start using BBM.

This news arrives after a few number of delays and some fake spam apps. Finally, BBM for Android is really arriving in Goole Play. It’s the first time that BlackBerry’s app is available on a non-Blackerry device. In the next few hours, you will start seeing BBM in Google Play, the App Store and in select Samsung App Stores – where it will be free to download. 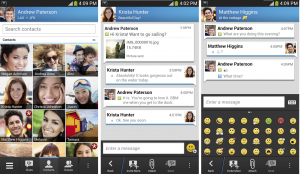 What includes this new version? Well, now you can chat with your friends on Android, BlackBerry and iPhone. The BBM is always on, you don’t need to open any application, and you will know when the messages have been delivered and read. You will be able to share photos, files, documents and voice notes (and obviously, you will have your collection of emoticons for every possible mood!).

One of the characteristics of BBM is that it uses PINs instead of phone numbers or email addresses. It gives you more control about your privacy. The system also supports chat groups to share pictures, lists and appointments as well as multi-person chats and messages broadcasting.

According to Blackberry, about six million people already signed up for information about BBM clients. You can download the BBM application for Android users from Google Play or directly from the widget below:

BBM for Android on AppBrain