As we have reported previously, the rollout expected by Google will take into account the substantial changes that the developers are still finding out from the new software. The supported devices are Nexus 5X, Nexus 6, Nexus 6P, Nexus 9, Nexus Player and Pixel C.

Compared to the fourth Developer Preview, the fifth does not change much: the group of Mountain View has concentrated mostly in the resolution of bugs found earlier and in optimization experience offered by the user interface. And being a test release, it is made for small and big problems, including stability and fluidity. For the appointment of the final version of Android 7 Nougat, it probably comes after the summer, between October and November, coinciding with the release of the new device of the Nexus range. One the most anticipated smartphones of the year.

Hard to know when Android 7.0 Nougat will be released in its final version, But this time there is something easy to know: Android Nougat Easter Egg. Just go back into Settings, and it will popup a new label called “Android Easter Egg”, where you will find the game Neko Atsume. Remember that it is always possible to become part of the Android Beta program, which allows you to receive the operating system test build. 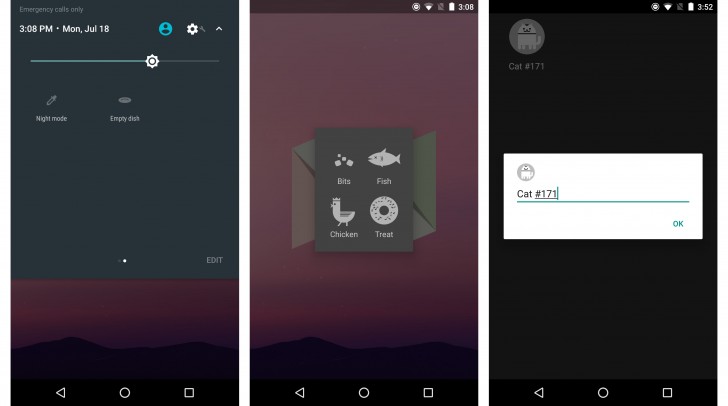 Android Nougat Developer Preview 5 is the closest to reality. There does not say anything new, but if you think about it, Google knows the web well with its various trends. Android 7.0 Nougat is destined to make its presence on HTC 10, HTC One A9, HTC One M9, but are to take into account also the HTC One M8 and HTC One M7. This operating system version is able to offer developers an experience that is very close to the final version of the OS owner of Mountain View.

Among the changes introduced by Google in transition from Marshmallow to Nougat and which was given a demonstration with these five developer previews, is the restyling of the notifications menu that goes from templates, the ability to group them to show them as a group and to exploit them for direct response. With a swipe from left to right or touching the button you can open the panel to switch quickly from one function to another without returning all the time back again.