Android 6.0.1 Marshmallow starts rolling out all of a sudden

Unexpectedly and by surprise. We refer as well to the information just to know about the arrival of the first iteration of Marshmallow, the current version of the operating system of Google. Apparently, some users have already begun to receive Android 6.0.1 Marshmallow, which was not expected until the beginning of 2016.

Yes, for the moment it does not seem to be a global launch and for everybody, because it looks for the data that Google has been restricted to only deploy to Android One models and, now, to those with a Cherry Mobile G1, who have “sound the alarm”. Thus, it seems to want to check the operation of the new operating system version narrowly to be clear that performance is adequate. The procedure is not exactly a surprise, since other companies such as Motorola, perform the same operation as part of the final test period and the results are still quite convincing when proceeding to the global roll out. But the case is that they are already some users who can enjoy Android 6.0.1 Marshmallow.

We do not have much information to share and be compared to the developments included in Android 6.0.1, which is normal because we just know that users with Android models and specified One receive the update via OTA. Thus, we must be vigilant about what goes next, but all indications are that minor corrections and we do not deepen with important issues such as those indicated now. 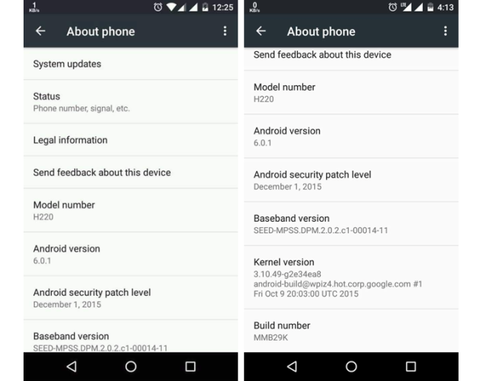 Incidentally, in the image it shows that the security section date is December 1. This may be something suspicious about how real the information is, but the fact is that this could indicate that the new Android 6.0.1 version coincide with the corresponding monthly patch Google will send with the operating system in December. Therefore, we should not rule out the truth of what we have seen.

The fact is that there are new and these are very positive for those who have an Android One, such as have been made with the model BQ, as it appears that these will be the first to enjoy the new iteration of development by the Mountain View company: Android 6.0.1.

Android 6.0.1 Marshmallow starts rolling out all of a sudden