Since that in February of this year the instant messaging service WhatsApp was acquired by the social network Facebook, the smartphone application has been in the news quite frequently, in first instance due to the failure suffered globally that occurred just three days after the acquisition by the company of Mark Zuckerberg, but later by the news of a new voice calling service that was rumored to be implemented in the near future.

That near future has been known and recently confirmed and we have been allowed to take a look at this function using the latest beta version (2.11.241) available through the official website of WhatsApp, only to terminals which provide the Android operating system; not yet available for download from Google Play because of their condition of not final version. 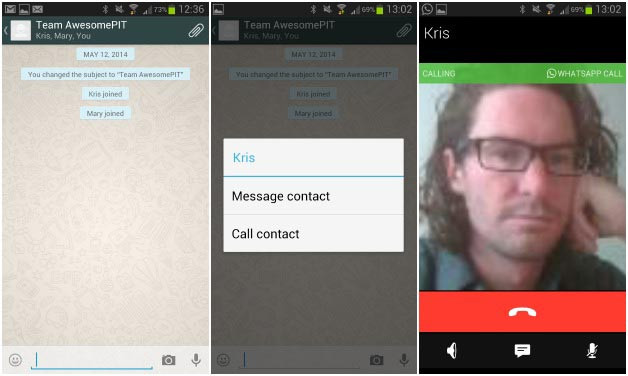 As the service is still not operational –we assume that it will be in a couple of weeks, once the version stops being beta for being definitive- for now we only have seen how the interface of this new service is and we already knew that the voice calls were going to be made via VoIP connection. The interface of this new feature appears when you click on a contact in WhatsApp, where a new option says “Call Contact” (under “Send message”). Once you tap on the option to call the contact, the WhatsApp interface is going to change and fill the screen with the picture of your contact with a big green strip at the top of the screen indicating that the call is being made, and with a red stripe button on the bottom that allows you to hang.

With this new WhatsApp aims to keep the same number of users (at least) and make even more against not only their known rivals of instant messaging service (Telegram, Line, WeChat, BBM, …), but now also against other applications such as the Microsoft-owned Skype or Google Hangouts.