In the recent months, Twitter has been improving photo sharing and editing features. This aspect is becoming increasingly important, and it seems that the company will continue to expand the field. In this sense, the new update adds the ability to edit images directly from the application, without requiring the use of any external app.

Twitter now allows us to rotate and crop images in several predefined formats such as square or wide. It also includes @ mention to our friends when we share a photo, so they can receive the notification. 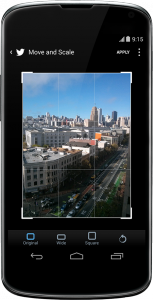 In addition, the update includes another function. Now, if we don’t have any new Tweets when we refresh our timeline, we will see a list of suggestions for possible topics of interest to us or the Trending topics of the moment.

This functionality has been criticized by some users as a form of covered advertising, as we get information that we had not requested. On the other hand, others see it with good eyes, because it is another way to receive information about current issues based on our interests. 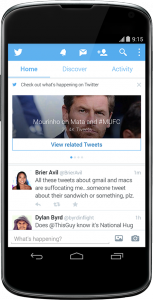 Twitter tries with this update to implement new features for your app, which in recent months has been losing users in favor of other apps. These alternatives applications for Twitter offer better design and easy operation and are highly appreciated by a growing number of users.

Applications like Tweedle for Twitter, Talon* *, have seen their downloads increased, while the official Twitter app seems unable to convince a quit big part of its potential market. However, one of the major criticisms to these apps is the amount of RAM consumed, which in some cases can be considerably higher than the official Twitter app.

*Note that Talon is now only available for Android Lollipop. See more information about this here.

*Carbon has been retired from Google Play, since it has reached the amount of established tokens, you can use Falcon instead

The update of the official Twitter’s version is available for Android, and the company says it will soon reach the market for iOS devices.