Google has finally presented the official release of the new version of Android. Android 5.0, named Lollipop, brings many changes to the last version. It is the biggest change experienced since Android Ice Cream Sandwich, and it comes full of news.

In the visuals, the differences are obvious. With Android 5.0 arrives Material Design, the new interface based on different layers that provide a smooth motion. It is designed especially to fit into the different screen sizes, from tablets to smart watches.

Notifications has received an special attention. Now we can interact more fluidly with the notification system. On the one hand, we can respond to messages without leaving the app we are using (or without activating the mobile screen if we have it locked). We also have full control over which notifications we want to receive and chose at which times we don’t want to be bothered. We have a filter system that will allow us to decide the type of message we want to receive and schedule the hours when we want to activate a mode called Priority, which becomes a kind of “do not disturb” mode.

Another interesting features of the new version is the guest mode. Thus we have now access to our device using this mode, and we can choose which information we want to share. We can lend our smartphone or tablet to a friend without worrying about the personal data we may have inside.

The overall system is optimized to work faster and more efficiently, thanks to the new virtual machine ART. It also includes support for 64-bit processors, while maintaining compatibility with 32-bit.

Another expected point is the camera application. The new API offers many more options and includes native support for raw formats. Now, it is possible to control and adjust separately the sensor, lens and flash. 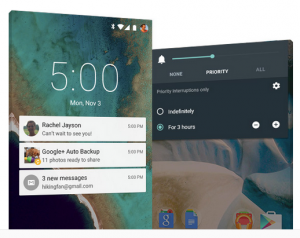 Android 5.0 Lollipop brings a lot of changes related to rapid adjustments, designed to make easy the small actions such as turn on/off the Wi-Fi, GPS and Bluetooth. Connectivity has also undergone important changes especially with the choice of Wi-Fi networks and connecting Bluetooth Low Energy.

Google has announced that the Nexus 4, Nexus 5, Nexus 10 and Nexus 7 will be updated to Lollipop, as well as all the devices with Google Play Edition. All Motorola devices from 2013 and 2014 will also be updated: Moto X (1st and 2nd generation), Moto G (1st and 2nd generation), Moto G 4G LTE, Moto E, Ultra Droid, DroidMaxx, Droid and Mini. You can check the latest updating news at the Motorola website.