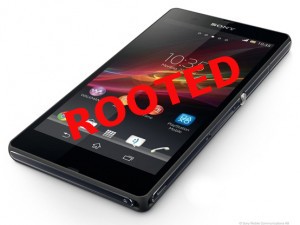 Do you want to be root in your Sony Xperia Z? Of course.

Well, a vulnerability in the Sony Xperia Z has been discovered and users can become superuser (root) in this wonderful device. Even with the bootloader blocked you can get superuser permissions in the Xperia Z.

But, what is rooting?

Android rooting is the process of allowing users of smartphones, tablets, and other devices running the Android mobile operating system to attain privileged control (known as “root access“) within Android’s subsystem.

Rooting is often performed with the goal of overcoming limitations that carriers and hardware manufacturers put on some devices, resulting in the ability to alter or replace system applications and settings, run specialized apps that require administrator-level permissions, or perform other operations that are otherwise inaccessible to a normal Android user. On Android, rooting can also facilitate the complete removal and replacement of the device’s operating system, usually with a more recent release of its current operating system.

To be superuser (root) in your smartphone or tablet is a requirement if you want to run apps like Titanium Backup, ROM Manager, Hexamob Recovery, etc… because these apps let you make special actions not alloweb for a normal user.
Now, Sony Xperia Z users can access to many special features of your phone, change the ROM, install special apps only for root users,…

There are some rootkit (tool to get root permissions in your device) prepared for some versions of Sony Xperia Z but certainly in the next days will appear for the rest of versions.