In a classic tower defense game, we try to defend an area of the map stopping the enemies to arrive there. To achieve this, several defense towers have to be placed in strategic locations on the map to stop the advance of the enemy troops. It’s a genre that has had considerable success on touch screen platforms, especially thanks to titles like Plants Vs. Zombies or Kingdom Rush: Frontiers.

OTTTD (Over The Top Tower Defense) is a game that combines the best features of the genre and includes some elements that distinguish them from the rest. As with any other defense game, we must place towers along the map to stop the advance of several troops of different creatures who are attacking us. From mechanical sharks to a cycling octopus, we will find all kinds of exotic characters that our towers will try to convert into bait. Literally. As more and more enemies fall under the fire of our towers, their bodies accumulate in the ground to completely cover the entire battlefield. 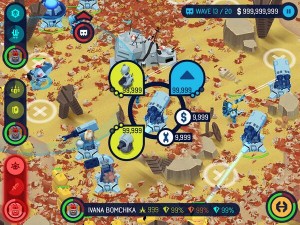 So far, OTTTD follows the classic line of any game of the genre. The novelty is three heroes that we can customize with weapons and special abilities. These heroes will be part of the battle, either attacking enemy troops or repairing the towers, and will gain experience as they overcome attacks. The heroes provide an extra point of customization, giving a greater role to the strategy, as the progress of the game changes depending on the characteristics and skills that we give to our heroes. However, this concept is not new. Kindgom Rush: Frontiers already included heroes in one of their updates, but in this case, OTTTD has brought these heroes to a central position, giving them a clear leading role in the development of the game.

The level of the game follows a curve of increasing difficulty, pretty easy at first, which allows us to become familiar with the game options. There is only one difficulty level, and if we have experience in this type of game, we may find the initial levels too easy. However, we can use them to explore all the features of both our towers and our heroes, who, from the first moment, can be customized with the skills we find more useful for the future battles. 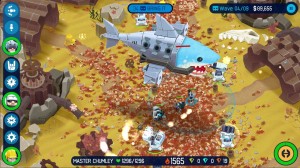 OTTTD weights only 66M and it is available at the App Store and the Google Play for $2.99. However, despite the fact it’s paid, it includes in-app purchases to speed up the game and improve our heroes. While it is true that we can advance trough the game without having to pay more, this progress will be somewhat limited if we don’t buy any of the proposed improvements. Still, it’s a highly recommended game for all the people that enjoy the genre.