Oppo N1 will be available internationally on December 10th. The device costs $599 in the U.S. and €449 in Europe, doesn’t have LTE and come with pre-installed CyanogenMod Software.

The CyanogenMod install app was removed from the Play Store a few days ago and is no longer available there. However, Oppo prepared a special edition of the Oppo N1 which will be running CyanogenMod out of the box, a customized version supporting all the unique features of the Oppo N1 device, such as the touchable back panel and the rotating camera.

Last November 8th, in press news, the company announced that:

“The CyanogenMod team has tailored their software to specifically support all of the unique features of the OPPO N1 including the O-Touch back touch panel, O-Click Bluetooth remote control, the revolutionary rotating camera, and also unique features from ColorOS such as double tap to wake and screen-off gestures.” 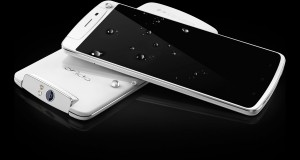 So, Oppo will be selling a limited edition of this flagship device with CyanogenMod and a non-limited version with Oppo’s ColorOS system. This series supports the installation of CyanogenMod directly from the Oppo N1 stock recovery, without rooting and installing a custom recovery.

The N1 comes with a 1.7 GHz Snapdragon 600 processor, 2 GB of RAM and 16 or 32 GB of storage. The screen is a full HD (1080p) 5.9-inch display powered by a 3610 mAh battery. This flagship device has some unique features, like a rotating 13 MP camera and a rear touch pad. Oppo has included the first camera with six physical lenses in an Android device, and has done it fitting the camera onto an adjustable hinge.

The list of countries where the N1 will be available is not announced, but Oppo has created a page in which you can check the availability for any country.