Humble Bundle 8 for Android and PC


Humble Bundle 8 for Android and PC

Last week, we saw a new edition of Humble Bundle, with four games for Android and PC (Windows, Linux, and Mac). As other editions, if we pay a price above the average, we have access to more games. There were 2 extra games offered originally, and yesterday they added two more. So you can access now a total of nine games if you pay more than the average, currently set on $4.38. And remember, you are going to support charity!

The games included in this edition are: Little Inferno, AaaaaAAaaaAAAaaAAAAaAAAAA! for the Awesome, Gemini Rue, Jack Lumber and . If you pay a price above the average, you can also access to Hero Academy, Anomaly 2, Solar 2, Bad Hotel and The Bard’s Tale. 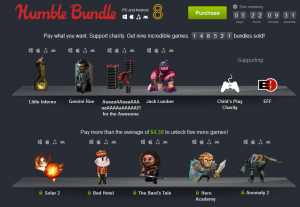 Here there is the list of games in this edition:

Little Inferno. It’s a nice visual game, puzzle style, where we can unleash our pyromaniacs’ instincts.

Gemini Rue. It is a science fiction adventure set in a rainy planet, full of mysteries and lies.

Lumber Jack. Remove all the trees of the forest, in an attempt to avenge his beloved grandmother.

AaaaaAAaaaAAAaaAAAAaAAAAA ! for the Awesome is a jumping game where we jump from all types of buildings in Boston. It is the first Humble Bundle game with support for the Oculus Rift. 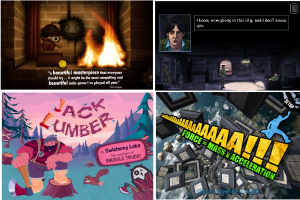 Hero Academy is a chess-like strategy game, where you try to destroy your crystals’ opponent before he destroys yours.

Anomaly 2 is a tower defense game with amazing graphics.

Solar 2. We can build a solar system, fight other planets or wreak havoc with a black hole … which option will you chose?

Bad Hotel. Build fast before seagulls, rats, and other forms of ‘wild life’ can sabotage your hotel.

The Bard ‘s Tale. Use magic songs to achieve your goals in a fun and original game.