We are approaching the end of the first half of 2017, and sources are beginning to talk more and more about smartphones, the release of which are planned only for the next year. For example, today at our disposal was information on the characteristics of the flagship smartphone Huawei P11 and Mate 11.

It is reported that the flagship of Huawei for 2018 will receive a large 5.8-inch capacitive touchscreen display with 2K resolution, an aspect ratio of 18:9 and a curved 2.5D glass Corning Gorilla Glass 5.

It seems that when developing this device, the Chinese manufacturer was inspired by the flagships of Samsung and LG, whose screens also have an unusually elongated shape.

Huawei P11 will be running the Google Android 8.0 O operating system with the EMUI 6.0 firmware. The new smartphone will include 6 GB of RAM and different options with an internal storage for 64 GB, 128 GB and 256 GB.

Also, the device will be based on the latest hardware Kirin 980, performed according to the standards of 7-nm process technology. On the back of the Huawei P11 is a dual camera with LEICA optics. Its case will be protected by the IP68 standard.

Other features of the device include support for quick and wireless charging, software with elements of artificial intelligence, as well as a large selection of color options: black, white, blue, green, gray and silver.

Finally, the leak contains information about the possible price of a smartphone: $ 725-870. And as for the date of its release, probably after the World Mobile Congress (where it will be presented). 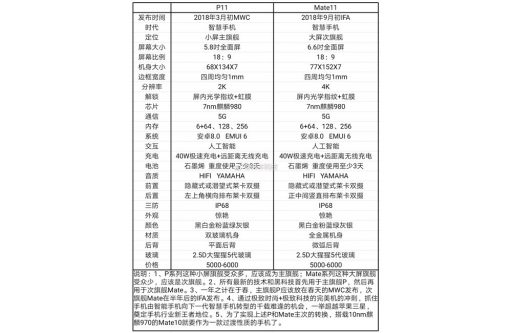 Another novelty will be the Huawei Mate 11. This device will appear at the September fair IFA 2018 and will include a 6.6-inch capacitive touchscreen display with a 4K resolution and, as the Huawei P11, 18:9 aspect ratio. The other specs are almost a copy of the functionality of the Huawei P11.

Sources suggest that Huawei P11 will be announced on Mobile World Congress 2018. As for Huawei Mate 11, it will take much longer to wait for its appearance, and the tablet will be shown only at the IFA in September next year. At the same time informants suggested that the cost of both new products will be in the same range.