HTC U 11: here is the smartphone with Squeeze feature

Here we have the HTC U 11, smartphone characterized by pressure-sensitive edges feature called Squeeze. We’ve been waiting for this flagship smartphone for a long time and now we know all about it.

HTC has finally announced, at a press event in Taipei, its new high-end smartphone. This is a device that has been so talked about in recent times as it incorporates a unique and unique feature on the market today. In fact, the HTC U 11 has edges that react against the hand pressure so it will be enough to squeeze the device to perform certain operations.

This feature is called U Touch by HTC, and it is integrated with Edge Sense to perform a variety of operations, from taking a snap image to opening an app, and more. There are many personalization options available and we should be able to use this feature in any condition even with gloves, for example.

Speaking of design and technical data, HTC really gets all the attention it wanted. The materials are, above all, highly sought-after as the body that reflects and transforms light by providing different shades at all times of the day thanks to the use of various layers of minerals on the back (spectrum optic with hybrid deposition).

The device has rounded edges, thanks to the aluminum that encounters 3D glass. The thickness is always reduced, at least according to the presentation images. 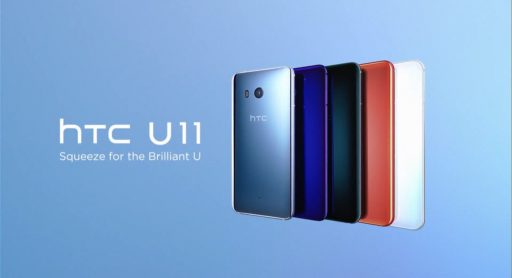 The device incorporates a 5.5-inch Super LCD display with QHD resolution, a Qualcomm Snapdragon 835 processor, 4 GB of RAM, 64 GB of internal storage expandable via microSD (in some countries there will be a 6 GB/128 GB of RAM + ROM), a rear camera of 12 megapixels (UltraPixel) with OIS multi-axis and f/1.7 aperture, a 16-megapixel camera on the front with UltraPixel technology, a 3000 mAh battery and, of course, Android Nougat. The HTC U 11 camera got a DxOMark score of 90. One of the highest scores ever, also thanks to ultra-speed autofocus.

The device then is IP67 certified for water and dust resistance. Also, you can record audio in 3D. HTC’s sound has been upgraded with various technologies to improve listening (BoomSound, USonic headphones and active noise elimination) as traditionally, and the 3.5 mm jack for headphones was removed. Note that USonic headphones analyze the user’s internal ear with advanced sonar-like technology and then adapt the audio profile as needed, optimizing playback for any type of ear.