Google Taimen with 4GB of RAM and Android O on Geekbench

The evidence about Google working on a new generation of smartphones is here once again, after those identified to date with code names Walleye (for the smallest smartphone) and Muskie (for the largest smartphone).

Back in the early rumors that emerged in the network since March, the name of a third and mysterious device was peeping out into Google sources, but it did not reveal any further information.

However, besides these two names, the name of Taimen (the common trout) was also mentioned on some occasions, but there were no particular rumors about it after that month.

At a distance of several weeks, we can confess that Taimen really exists and that some developers would take the first tests, leaving traces in the Geekbench database.

According to the documentation, there would have 4GB of RAM, Android O distribution, and a Qualcomm processor set at a 1.9GHz clock, judging by single-core and multi-core scores and architecture, that would match a Snapdragon 835, so a third device that should always fall into the high-end segment. 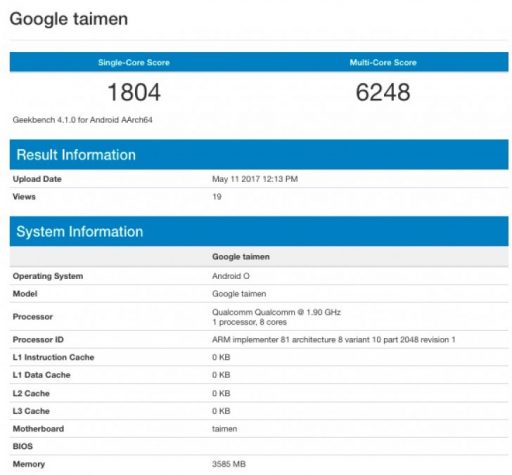 As the successors of the first Pixel and Pixel XL phones launched in the market at the end of 2016, it turns out that the company is working on developing not one, nor two, but three new phones to be launched by the end of this year. In March, the code names of the trio of expected phones -Walleye, Muskie and Taimen- leaked with one, the Taimen, which was recently spotted on the Geekbench site, so the first information of a prototype tested with a benchmark.

Taimen should be the largest model of the new device’s trio, so Muskie and Walleye should be smaller. According to rumors, Muskie and Walleye will be the successor phones of Pixel and Pixel XL respectively (Pixel 2?), while Taimen does not rule out that it can be a tablet.