Along with the Nexus 6, Google has presented its new tablet, the Nexus 9. The new device has been manufactured by HTC and with it, Google has made the transition to the large tablet’s market. In addition, the company has also presented a totally unexpected device, the Nexus Player.

The Nexus tablet has a 8.9-inch IPS display with Gorilla Glass 3 and a resolution of 2048 x 1536 pixels. It packs a 64-bit Tegra K1 processor running at 2.3 GHz and has 2 GB of RAM. There are two different models available, one with 16 GB of internal memory and the other with 32 GB. A 6700 mAh battery ensures to provide 9 hours of video. Like the Nexus 6, it comes with the new Android 5.0 Lollipop.

The new tablet has two cameras, a rear one with 8 MP and autofocus, flash LED and f/2.4 aperture and front one with 1.6 MP and f/2.4. The overall dimensions of the tablet are 153.68 x 228.25 x 7.95 mm, small enough to carry the device around without any problem. Thanks to HTC’s technology, the Nexus uses the Boomsound speakers typical of the Taiwanese company. 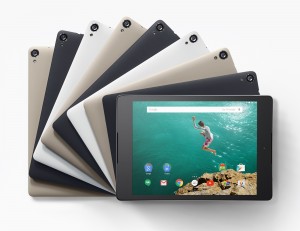 Optionally, we can acquire a folding case with keyboard, which joins to the tablet using magnets and connects via NFC. It can be mounted in two different configurations to type from different angles, and carries a battery that needs a recharge every 5 months.

The Nexus 9 is now available for pre-booking at the Play Store and Amazon, although until early November it will not be actually available. Prices vary depending on the model: $399 for the 16GB model, $489 for the 32 GB and $569 for the 32 GB model with LTE connectivity.

The Nexus Player works with Android TV. It connects to the TV using an HDMI cable and to the web via Wi-Fi. It includes Google Cast (Chromecast) so we will not need an extra Chromecast device to enjoy its features on our TV.

This new member of the Nexus family has a quad core Intel Atom processor running at 1.8 GHz and offers 1 GB of RAM and 8 GB of internal storage. In the area of connectivity, we find Bluetooth 4.0, Wi-Fi a/b/g/n/ac (2.4/5GHz), a microUSB port and HDMI 1080p.

It can be purchased alone or with a Gamepad, from which there aren’t many details known yet. Both the Nexus Player ($99) as the Gamepad ($39) and can be purchased in the United States Play Store.