Google I/O 2017 is really near but Google couldn’t wait any longer and it announces Project Treble, a tool designed to address one of the biggest issues related to Android. That is: the distribution of new operating system versions.

And what’s the biggest problem with Android? Hard question, but probably many of you will have responded in the same way, citing a word that, from the dawn of the green robot, does not stop tormenting all fans: fragmentation.

Project Treble is inspired by the Compatibility Test Suite and will enable developers to simplify and speed up the operations needed to write applications, which will eventually end up with millions of devices spread all over the world without having to make changes to any single type of smartphone or tablet.

With the new modular architecture, Google will separate the steps needed to bring apps into the Play Store to better assign tasks to those who owe it. This will be accomplished by introducing a new validated interface from a VTS (Vendor Test Suite similar to CTS) between the framework and implementation of who deploys the app itself.

Prior to Project Treble, almost all Android codes would have to undergo an update to become compatible with new versions, but now OEMs (so generally companies that manufacture products) can “bypass” companies like Qualcomm.

In summary, smartphone and tablet manufacturers will be able to choose to directly deliver a new Android version to consumers by simply updating the framework for the operating system that they intend to deploy.

Project Treble: Difference between the OS and the interface 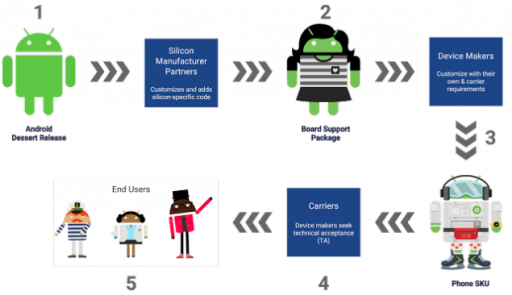 In essence, there is a separation between the heart of the Android system and the layer implemented by the hardware manufacturers. In this way you can update the two parts separately, keeping perfect compatibility even with the advancement of the versions. The new Project Treble will come with Android O and it is already integrated on Pixel and Nexus that include the first Developer Preview of the OS. In fact, this is a very important change for Google software, and we hope that all third-party vendors will soon be able to make the most of it, to the delight of their customers.

This type of modularization (similar to what has been done by splitting up most Android system apps, and then updating them directly from the Play Store) will allow companies such as Samsung, LG, Huawei and Sony to update devices that are already on the market with future OS versions of Google, which could solve the problem of fragmentation and the abandonment of older devices from manufacturers.