Countdown to the new Nexus 5 and the Android version 4.4 KitKat


Countdown to the new Nexus 5 and the Android version 4.4 KitKat

Missing the confirmation, but persistent rumors have predicted that will be next Tuesday, October 15th the long awaited date of submission of the new Nexus 5.It will be produced by LG and mount the Android version 4.4 kit kat, inspired by the famous chocolate bar produced by Nestlé. Some images have already been spread and they have revealed some details about the new device. Substantial innovations are related to the graphical interface, the white icons in the notification bar and new functions, such as we find the new section Tap & pay in the settings. Through this you can make payments via NFC associating your SIM or your Google Account. 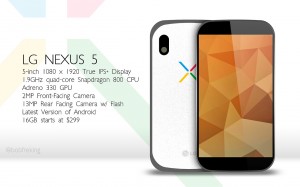 As concerns the design, it will be with a rubber back and comparing the performances it will be lighter and faster than the previous Nexus 4. Will also improve the characteristics of the display, which looks a lot sharper, and the camera (it will support a 1.3-megapixel front-facing camera and a 8 megapixel rear main camera with LED flash and OIS). You just have to wait a few days to reveal other secrets of this new jewel.