CyanogenMod continues his unstoppable career through the mobile devices, and in its last nightlie has added a new noteworthy. Its official launcher, Trebuchet, is gaining many features lately, and has now created an alternative to Google Now. As we know, if we use Google Now Launcher, sliding rightwards we will access to Google Now card, being able to obtain our personal information from the Google wizard.

Now, in the last nightlie, holding to display a menu of configuration renovated will appear, including those already present in the other versions wallpapers, options and issues selector is added also. Other than that, if you slip up will access thousands of customization options Launcher Icons, displacement effects, grid, and the novelty: the choice between Google Now or CM Home. Easily we can see it is a set of cards son of Google Now.

What, so far (because we still don’t know where the project is going), CM Home gives us is a set of cards that will show us various system notifications. In this case, sliding appear the next alarms, emails, text messages and updates of CyanogenMod. 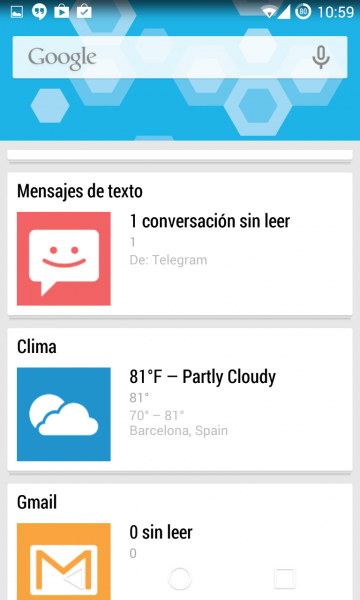 Following the mechanics of Google Now, if a card slip will remove it from the list, click on it and we can interact and access the application to which it refers. The latter can give some problems, and although unable to open the associated application on occasion, giving an error when trying.

Also mention that if we choose CM Home, sliding from the bottom of the main screen also we can access Google Now. Probably most of us will much prefer the new options that are included in Trebuchet than in the CM Home, considering it is a new platform and most likely add functions. Just like in Google Now Launcher, the Now interface is to the left of the main screen in Trebuchet. However, it’s clearly still a work in progress. The screen dims for a moment as you swipe over and it takes a second to refresh the cards. Swiping back to the home screen comes with a longer delay as well. We’ve been told these issues will be addressed in the coming weeks, though.