Apple has unveiled some hours ago the new iPhone 5s and iPhone 5c (low cost version) . It’s the first time Apple has unveiled two iPhone models together and this is due to the high competition that exists in the mobile technology sector. In this presentation we have seen that there are no changes in the design of the iPhone and the size of the screen. It seems that changes has been are inside the new iPhone 5ss. Let’s see what they have in both the iPhone 5s and the iPhone 5c and we will show you a comparison table in front of some Android devices currently on the market and some of those still to be launched.

The first thing we can point and that more than one user will notice is that the new iPhone 5s is physically identical to the previous iPhone 5. We have the same screen size with 4 inches and the same design that already existed in the previous version of the iPhone . As we said, the changes in this new iPhone 5s are inside. One of the features that make this new iPhone 5s different from other mobile phones is that is the first to incorporate a 64-bit processor , the Apple M7 , consisting of two cores that make the hard work and a new co-processor responsible for managing the device sensors like accelerometer , gyroscope, etc … This new processor as Apple says will be able to greatly increase device performance using both conventional and gaming applications.

The iPhone 5s will be available in several versions 16, 32 or 64GB of internal memory and they won’t have any slot for SD cards . The details about the amount of RAM of this new model are unknown. It seems that Apple is not yet interested in NFC technology because the new iPhone 5s haven’t got any NFC chip built. About the cameras, the iPhone 5s have a 8 Megapixel main camera called iSight and a front camera of 1.2 Megapixels. The main camera falls a bit short considering that new Android devices and some Nokia models are including better cameras. However, it is noteworthy that Apple has provided iSight , the main camera, with f2.2 brightness and increased the size of the sensor to capture good quality photos with bad lighting conditions as well as other significant improvements.

Battery life. The iPhone 5s is the King

One of the points that Apple has wanted to improve significantly over previous versions of the iPhone has been the battery. The new iPhone 5s greatly improves their antecesores. 250 hours standby , 10 hours of talk time , 8 hours connected on 3G, 40 hours of music playback and 10 hours video playback are the numbers that Apple claims can be achieved with the battery life of the new iPhone 5s.

The new iPhone 5s has a new home button with a new feature. Touch ID is a fingerprint sensor added to the home button. This fingerprint sensor can be used to unlock the iPhone 5s as other tasks like iTunes purchases without having to type the password. El Touch ID, as Apple informs us , is able to read up two levels deep in the skin , is very accurate and efficient so simply placing your finger over the sensor , is able to read the fingerprint without problems . This ability to read two levels deep make possible to detect the fingerprint even whenh the user has a wound on his finger. For lovers of privacy, who believe their fingerprints will be stored on any server , be quiet. Apple says that they will not store the fingerprints of users on any server , just the sensor will be able to recognize the owner of the device with the fingerprints stored them inside the processor that incorporates the iPhone 5s.

Here you can see a comparison with the features of the new iPhone models and some Android devices that can be found on the market actually or they will appear shortly. 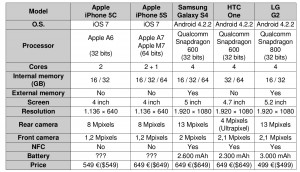 The new iPhone 5c is a change in Apple’s policy of presenting a single model of iPhone. This time, in order to compete with increasing low-cost Android devices market Apple has decided to launch a low-cost version , the iPhone 5c. It seems that Apple has decided to differentiate externally iPhone5s and iPhone 5c using plastic in the casing of 5c version. The metallic feel of the iPhone 5s and plastic feel of iPhone 5c make the difference in materials used in each touch. Inside the iPhone 5c , Apple has decided to incorporate a content similar to the old iPhone 5. Therefore, inside the iPhone 5c we find the same microprocessor, the Apple A6 which includes PowerVR SGX543MP3 GPU , 1GB of RAM and internal memory of 16 or 32 GB. The iPhone 5c cameras will remain the same as on the iPhone 5, a 8 Megapixel main camera and front camera of 1.2 M pixels . The iPhone 5c screen will remain the Retina 4 inches with a resolution 1,136 × 640 pixels with a depth of 326 ppi . The iPhone 5c supports LTE connectivity , WiFi 802.11 b/g/n/a and Bluetooth 4.0. In summary, it appears that Apple has introduced iPhone 5s for users who want something new with better performance and to keep the iPhone 5 but with the name changed for those that dont want to spend much money on your new iPhone. 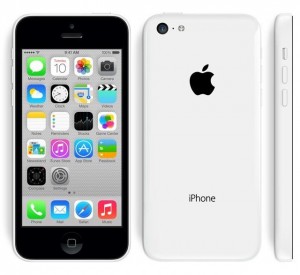 Both models , iPhone 5s and iPhone 5c will be on sale from next September 20 but not worldwide . Apple will go gradually introducing them so many countries will have to wait a little longer to get one of these new models.