Android has an Android security system with multiple layers that protects a device from most security problems. This is what is being discussed in the last days in Berlin at a conference on Android security. One of the central issues is malware. Researchers from Google are showing that it is not true that malware is a serious problem in Android. Many users of iPhone iOS are continually criticize Android security. According to them, these problems allow malware software to be easily installed on Android devices but this is not exactly true. At the Berlin conference Google researchers have shown data to prove it. Thus, several studies confirm that only 0.001% of the Android application installations can affect users in the form of malware or similar techniques. This is a very low amount.

This low level of Android security issues is due to a very elaborate multiple layer system that protects your Android device. These data concerning the Android security have been compiled by Verify Apps, Anti -malware service that now is part of Android . It is true that when a user uses a smartphone Android in a dangerous way is more likely to have safety problems. A reasonable use of an Android device ensures that safety issues are virtually zero. The most important is never install apps from untrusted sites or piracy sites. Everything depends on the user. 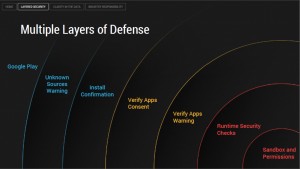 It seems there are many competitors trying to find any bug into Android to try to snatch some market share from Google part of the pie but this should be controlled in some way and can not afford to give false information thus confusing the users. All operating system can have bugs but normally they are always fixed in a short time. I’m sure Google is making a good job in this way.