Android Nougat will arrive on August 22

The new operating system from Google, Android Nougat, will debut with all probability on August 22. To support the hypothesis we have seen an online calendar of a Canadian operator with update plans for August 22 for both Nexus 6P and for Nexus 5X. LG, again on August 22, will start tests on LG G5.

We read about some rumors these days telling us that Android Nougat would arrive later this month, but now we can advance a concrete hypothesis on the exact date: August 22. To support the argument there would be two incontrovertible evidences: the first involves a Canadian operator named Telus, that has put on a calendar the future updates to the new operating system for Nexus 6P and Nexus 5X, starting from August 22. Even though it is written in small print as “the dates are approximate and subject to change”, leaves no room for doubt about the effective date of issue.

The second test concerns to LG. The Korean manufacturer, which will debut with the seventh incarnation of Android pre-installed on a new device on September 6, will put its testers to work on the Android N version to the current top of the line, the G5, precisely on August 22. It is clear that LG would launch the test phase an that is already something, but can not possibly advance of the official release. This explains why August 22 is again the official release date of Android Nougat virtually certain. 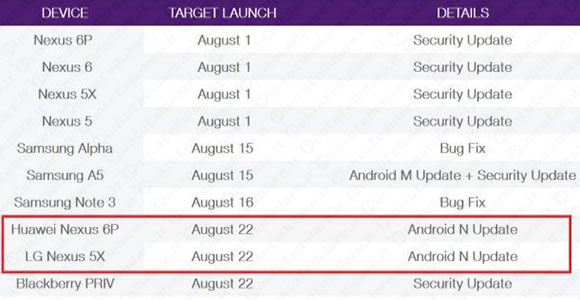 Thus, it is not the first time a few operators lets out similar information and have not always proven to be completely accurate, so do not stay too bad if next Monday nobody announces any update. In any case it is a confirmation that the release of Android 7.0 Nougat was really planned for August, as already reported by @evleaks, therefore we are confident to have news in the coming weeks.

We remind you that we do not expect, as the nature of things are, a release of the HTC Nexus concurrently with that of Android Nougat, so that we might have to wait until October to see in the flesh the two new smartphones. It is certain that, once such a stone has been thrown into the lake, we could hardly turn a blind eye: eyes open then for next Monday.

Android Nougat will arrive on August 22