Android 7.0 Nougat will come in August according to Evleaks

Evan Blass, known better as Evleaks, proved to be many times reliable regarding the advances related to the Android world. This time he reveals the alleged period of release of the new version of the green robot (7.0 Nougat) and gives us a clue about supported devices.

Evleaks says that Android Nougat will be released next month (August), with the security patch dated 5/08. Evan also confirms that owners of Nexus 5 will not receive any official update to the next version of the green robot. The officially supported Nexus devices, therefore, should be those that have received the latest Developer Preview, except for future announcements.

Moreover, it seems that an owner of Nexus 6P has already received the update (build NRD90M) via OTA by mistake. However, the whole thing weighs just over 49 MB (as you can see from the picture below) and it seems unlikely to be the final version, although the description would suggest it is. Anyway, Android Nougat could first be released in the Galaxy Note 7, followed by the Galaxy S7 and the S7 Edge. The last Samsung smartphones would get the Android N OS along with the Galaxy S6, S6 Edge, and S6 Edge Plus. 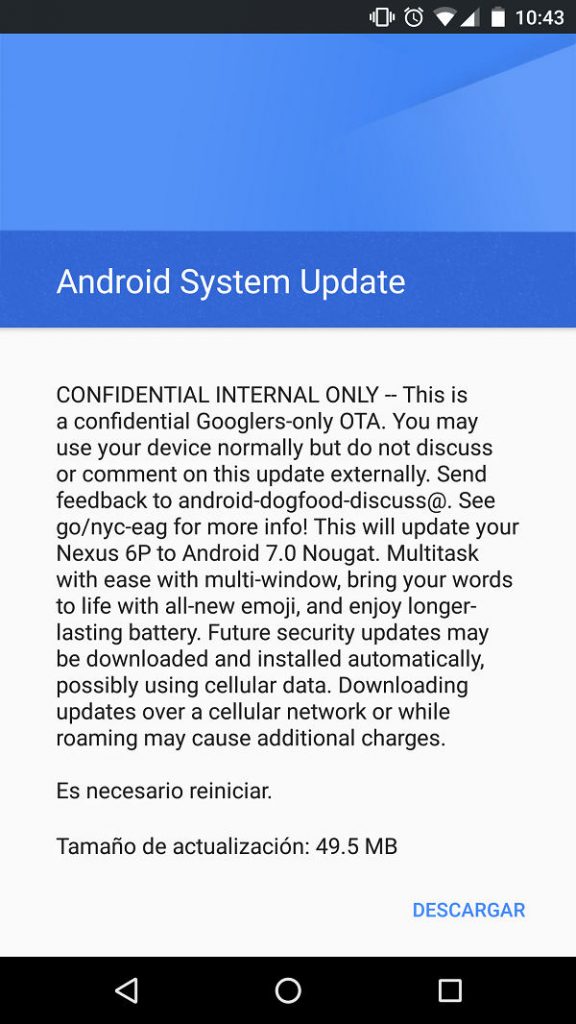 However, some users of Samsung warns that, depending on the Galaxy smartphone model that you own, it may take some time before you get your hands on Android 7.0 Nougat. According to the website Neurogadget, despite being one of the largest manufacturers of smartphones in the world, Samsung is known for being a bit late in the updates major release of Android.

For example, Android 6.0 Marshmallow, the predecessor of Nougat, was released on September 29, 2015, but was made available only five months after the update for the Verizon Galaxy Note 5. With the final release of Android 7.0 AOSP set to be released in August or September, Neurogadget suggests that Android 7.0 can not be released for some Samsung Galaxy phones until the first quarter of 2017. Meanwhile, XDA-Developers suggests that the new Android operating system could characterize improved support for stylus Galaxy Note series.

Android 7.0 Nougat will come in August according to Evleaks