Android 7.0 Nougat allows you to see where the applications have been installed

A few days ago, Google released the newest version of Android 7.0 Nougat Developer Preview, the last before the final release for the public update, which means that almost everything already available in it will be seen in Android 7.0. Among the new discoveries by developers who are testing the final version of the DP there is a new section added to the page that contains the information for the applications installed on the device.

There is no day without notifications from the Play Store about an application update. Good for many but a problem for those who have a large enough data connection and can not find a Wi-Fi connection available near. Google has long tried to help users, realizing the famous incremental upgrades that allow you to download only the actual MB going to change the APK and not the whole program as if it were installed on our smartphones. When an application is installed on a device with Android 7.0 Nougat, you will see a new entry for a single app with the “Store” label that shows if you have installed from Google Play Store or manually via SDK or through other stores.

What can serve to know this information for? It is not known, but may be helpful in the future to identify what are the applications downloaded from Google Play Store officially, so those apps that have passed the higher security checks will be apart from those installed manually by SDK found on the internet. One possible use could be that information companies give to its employees with a custom software to manage the professional and working life on a single device and can prevent the launch of installed applications from third parties, not from the Play Store, in order to reduce the risks for the security. 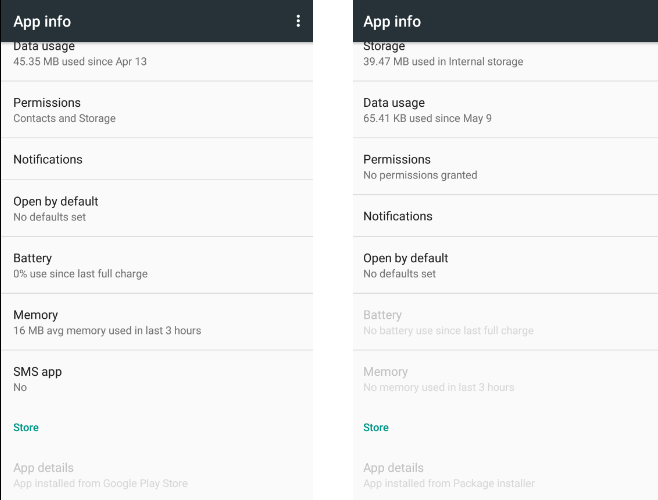 In short, with the roll-out already in progress, Google is preparing to integrate two new features: information on MBs update that you are going to download, and a new download algorithm. Just this second characteristic is very attractive. The algorithm is called bsdiff and applies specifically to applications that do not natively use tablets libraries allowing a reduction of up to 50% of the weight of the individual update.

Google therefore seeks to improve the use of content in the Play Store, but developers will check the code of software in order to optimize it to best. Probably we will know better why Google decided to specify the origin of an app installed when officially release Android 7.0 Nougat this fall.

Android 7.0 Nougat allows you to see where the applications have been installed