Amazon Underground, the new service for Android with over 10,000 dollars in free apps

Amazon has just announced the launch of a new service for users of Android named ‘Underground’ and apparently will end with its long promotion of what we have called “free paid app a day”.

Amazon yesterday presented a second version of its application store for Android. In the first store offered downloads daily at no cost to different applications; now (in the version called Underground), Amazon adds absolutely free content, including applications that run under the freemium model (the basic use is free, small amounts are paid by the aggregates, as more levels of a game or additional tools to basic an application). These applications are marked with a sign that reads Actually Free.

In this case, according to Amazon, the software has no additional cost because it has reached an agreement with developers of applications and games that offer their products in this store; it will pay per minute using the application. 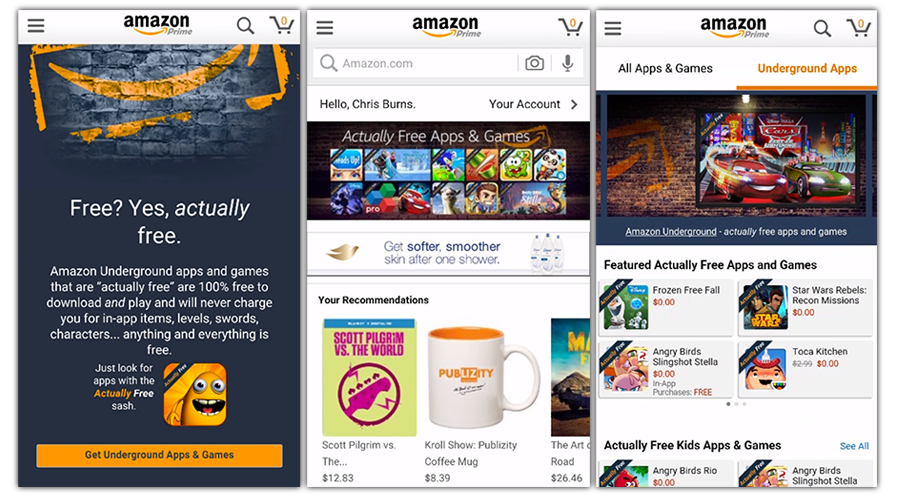 At one point, it’s a strategy similar to that implemented with books in late July: freelance writers who publish on Kindle paid for page read. The Amazon Underground store, which requires downloading an APK installation file (not in the App Store because it competes with Google), is compatible with any phone with Android 4 or higher.

The first thing you should do is update the phone configuration where you will install Amazon Underground from the Settings > Security menu and check the box that allows the installation of applications from Unknown sources. Then you have to go to the terminal downloads from the file browser and click the file and press Amazon_App.apk to install when requested. After installation the application will launch and will press Open to launch. Then if we open the menu shown on the left you can select applications and games where you will find all those applications, games and others that Amazon has chosen so you can get for free and which is valued at over $10,000.

Amazon Underground, the new service for Android with over 10,000 dollars in free apps